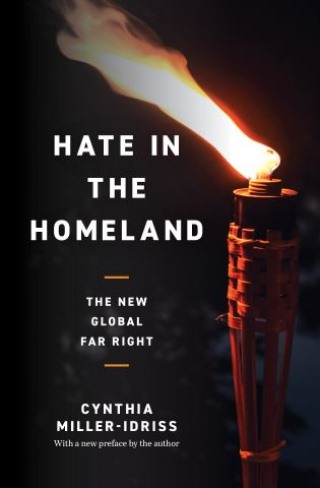 Hate in the Homeland

Hate crimes. Misinformation and conspiracy theories. Foiled white-supremacist plots. The signs of growing far-right extremism are all around us, and communities across America and around the globe are struggling to understand how so many people are being radicalized and why they are increasingly attracted to violent movements. Hate in the Homeland shows how tomorrow's far-right nationalists are being recruited in surprising places, from college campuses and mixed martial arts gyms to clothing stores, online gaming chat rooms, and YouTube cooking channels.

Instead of focusing on the how and why of far-right radicalization, Cynthia Miller-Idriss seeks answers in the physical and virtual spaces where hate is cultivated. Where does the far right do its recruiting? When do young people encounter extremist messaging in their everyday lives? Miller-Idriss shows how far-right groups are swelling their ranks and developing their cultural, intellectual, and financial capacities in a variety of mainstream settings. She demonstrates how young people on the margins of our communities are targeted in these settings, and how the path to radicalization is a nuanced process of moving in and out of far-right scenes throughout adolescence and adulthood.

Hate in the Homeland is essential for understanding the tactics and underlying ideas of modern far-right extremism. This eye-opening book takes readers into the mainstream places and spaces where today's far right is engaging and ensnaring young people, and reveals innovative strategies we can use to combat extremist radicalization.

Cynthia Miller-Idriss: Cynthia Miller-Idriss is a professor in the School of Public Affairs and the School of Education at American University, where she runs the Polarization and Extremism Research and Innovation Lab (PERIL). She is the author of The Extreme Gone Mainstream: Commercialization and Far Right Youth Culture in Germany (Princeton) and Blood and Culture: Youth, Right-Wing Extremism, and National Belonging in Contemporary Germany. Twitter @milleridriss