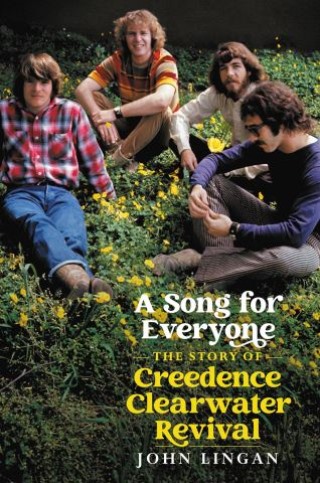 A Song For Everyone

The Story of Creedence Clearwater Revival

The definitive biography of Creedence Clearwater Revival, exploring the band's legendary rise to fame and how their music embodied the cultural landscape of the late '60s and early '70s

From 1969 to 1971, as the United States convulsed with political upheaval and transformative social movements, no band was bigger than Creedence Clearwater Revival. They managed a two-year barrage of top-10 singles and LPs that doubled as an ubiquitous soundtrack to one of the most volatile periods in modern American history, and they remain a staple of classic rock radio and films about the era. Yet despite their enduring popularity, no book has ever sought to understand Creedence in conversation with their time.

A Song for Everyone finally tells that story: the thirteen-year saga of an unassuming suburban quartet's journey through the wilds of 1960s pop, and their slow accrual of a sound and ethos that were almost mystically aligned with the concerns of decade's end. Starting in middle school, these Californian friends and brothers cut a working-class path through the most expansive decade in American music, playing R&B, country, and rock 'n' roll under a variety of names as each of those genres expanded and evolved. When they finally synthesized those styles under a new name in 1968, Creedence Clearwater Revival became instantly epochal, then fell apart under the weight of personal grievances that dated back to adolescence. As musicians and as men, they embodied the contradictions and difficulties of their time, and those dimensions of their career have never been explored until now.

Drawing on wide-ranging research into the social and musical developments of 1959-1972, extensive original interviews with surviving Creedence members and associates, and unpublished memoirs from people who knew the group closely, A Song for Everyone is the definitive account of a legendary and still-beloved American band. At the same time, it is also a cultural history of those same years—from Elvis to Altamont, Eisenhower to Watergate—seen through the eyes of four men who encapsulated them in song for all time, told by one of the rising figures in contemporary music writing.

John Lingan: John Lingan writes for publications including the New York Times Magazine, Washington Post, Pitchfork, and The Oxford American. He is also the author of Homeplace: A Southern Town, a Country Legend, and the Last Days of a Mountaintop Honky-Tonk, and lives in Maryland with his wife and three children.