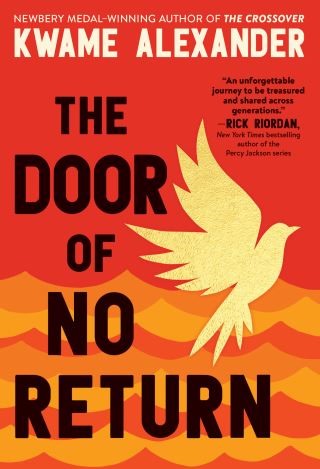 The Door of No Return

11-year-old Kofi Offin dreams of water. Its mysterious, immersive quality. The rich, earthy scent of the current. The clearness, its urgent whisper that beckons with promises and secrets…

Kofi has heard the call on the banks of Upper Kwanta, in the village where he lives. He loves these things above all else: his family, the fireside tales of his father’s father, a girl named Ama, and, of course, swimming. Some say he moves like a minnow, not just an ordinary boy so he’s hoping to finally prove himself in front of Ama and his friends in a swimming contest against his older, stronger cousin.

But before this can take place, a festival comes to the villages of Upper and Lower Kwanta and Kofi’s brother is chosen to represent Upper Kwanta in the wrestling contest. Encircled by cheering spectators and sounding drums, the two wrestlers from different villages kneel, ready to fight.

You are only fine, until you are not.

The match is over before it has barely begun, when the unthinkable–a sudden death–occurs…

The river does not care how grown you are.

As his world turns upside down, Kofi soon ends up in a fight for his life. What happens next will send him on a harrowing journey across land and sea, and away from everything he loves.

Kwame Alexander: Kwame Alexander is a poet, educator, publisher, and New York Times bestselling author of 35 books, including the Caldecott Medal and Newbery Honor-winning picture book The Undefeated, illustrated by Kadir Nelson, the Newbery medal-winning novel, The Crossover, Becoming Muhammad Ali, co-authored with James Patterson, Booked, which was longlisted for the National Book Award, Rebound, Solo and Swing.  A regular contributor to NPR's Morning Edition, Kwame is also the recipient of numerous other awards, including the Lee Bennett Hopkins Poetry Award, the Coretta Scott King Author Honor, three NAACP Image Award Nominations, and the 2017 Inaugural Pat Conroy Legacy Award. In 2018, he founded the publishing imprint Versify, and opened the Barbara E. Alexander Memorial Library and Health Clinic in Ghana, as a part of LEAP for Ghana, an international literacy program he co-founded. He is the writer and executive producer of the forthcoming Crossover TV series on Disney plus. He invites you to visit him at kwamealexander.com on IG and Twitter @kwamealexander.