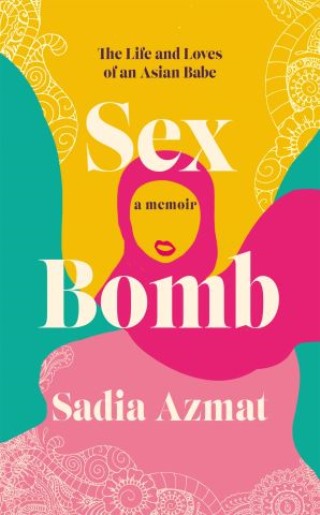 a 'hilarious, raw and poignant' memoir

For fans of Everything I Know About Love, Wrong Knickers and The Right Sort of Girl this is the incredibly honest and brilliantly raunchy memoir you don't want to miss.

'A hilarious, courageous and compelling read that explores the complicated relationship between culture, religion, identity and sexuality within the British Asian community. A must read for those who have lived it, and for those who haven't.' ANITA BHAGWANDAS

'Azmat raises complex, consequential matters with a lightness of touch. Sex Bomb is an easy read as she reflects candidly and boldly on her experiences and the factors that led to them.' CHORTLE

Sadia is a comedian who loves sex. She is also a hijab-wearing Muslim woman. The two are in a lifelong relationship, but it's complicated.

In a life of ups and downs, swings and roundabouts, Sadia has learnt the hard way that she can embrace her sexuality and be a proud British-Indian Muslim. From discovering her sexual identity after seeing a copy of Asian Babes on the shelf in the corner shop to rejecting an arranged marriage and feeling distanced from her culture; from her experience dating white and Asian men to her tumultuous relationship with her headscarf, Sadia is unafraid to spill the honest truth.

Sadia finds the funny in every experience she has and this book explodes with personality, warmth and joy. This book is for anyone who has ever felt different or alone; allow this book to fill you up and propel you forward, because we all deserve to feel like a Sex Bomb.

'Sex Bomb is so hilarious, raw and poignant. I couldn't put it down!' JENA FRIEDMAN

'Sex Bomb is a privilege and a joy to read, and everybody you've ever met should read it.' ANNE T. DONAHUE

Sadia Azmat: Sadia Azmat is a British Asian stand-up comedian and writer from East London. Through a chance encounter with a comedian in a call centre, she was introduced to the circuit, and now she is a regular stand-up. In 2018 Sadia launched her critically acclaimed BBC podcast 'No Country For Young Women' which was named as one of the 'Best audio 2018' by the Observer and Apple's Top picks for 2018. Sex Bomb is her first book.