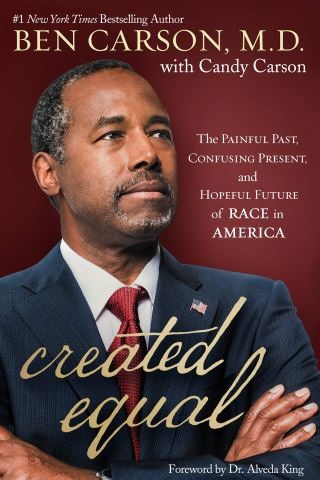 The Painful Past, Confusing Present, and Hopeful Future of Race in America

Bestselling author and conservative icon Dr. Ben Carson lays out a hopeful and inspiring road map for how America can come together.

External physical characteristics that are genetically encoded are things over which no individual has control. But rather than appreciating the gift of diversity, some have chosen to use it to drive wedges between groups of people. Some of these external characteristics are associated with the past moral failing of slavery. Though slavery in America formally ended in the 1860s, the vestiges of that evil institution are still with us today, and those vestiges often inflict guilt on some and facilitate feelings of victimhood in others.

In Created Equal, Dr. Carson uses his own personal experiences as a member of a racial minority, along with the writings and experiences of others from multiple backgrounds and demographics, to analyze the current state of race relations in America. Instead of using race as an excuse to remake America into something completely antithetical to the Constitution, Dr. Carson suggests ways to enhance and bring great success to our nation and all multiethnic societies by magnifying America's incredible strengths instead of her historical weaknesses.

Dr. Ben Carson is a bestselling author, the former Secretary of Housing and Urban Development, a 2016 Republican presidential candidate and the former director of Pediatric Neurosurgery at Johns Hopkins. He is also the recipient of the Presidential Medal of Freedom, the highest civilian honor in the land, and he holds more than 70 honorary doctorate degrees.

Candy Carson is the New York Times best-selling coauthor of America the Beautiful, One Nation, One Vote and A More Perfect Union, all written with her husband. She is a graduate of Yale, has an MBA from Johns Hopkins, and is a cofounder of the Carson Scholars Fund. A talented musician, she has arranged and conducted for several groups. She and Dr. Carson now live in Florida and have three adult sons, three daughters-in-law, and eight grandchildren.