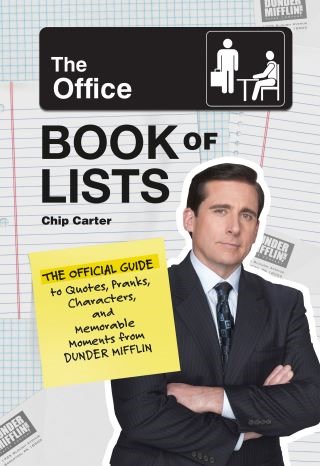 The Office Book of Lists

The Official Guide to Quotes, Pranks, Characters, and Memorable Moments from Dunder Mifflin

Packed with compelling facts and trivia from all nine seasons, The Office Book of Lists breaks down the memorable series in a collection of 100+ easy-to-digest lists focusing on themes and characters in an irresistible package.

Each entry in this comprehensive book celebrates another corner of The Office universe and offers new discoveries and facts concerning cherished characters and themes. From the most hilarious pranks played at Dunder Mifflin to Michael’s best "That's What She Said" moments, each list will delight fans and remind them why The Office is one of the most popular comedy series of all time. Each list also helpfully indicates season and episode. Lists include:

Including full-color photos and visuals throughout, The Office Book of Lists is an officially licensed must-have collector's item for the ultimate fan.

The Office is a trademark and copyright of Universal Content Productions LLC. Licensed by Universal Studios 2020. All Rights Reserved.

Chip Carter: Chip Carter has written numerous entertainment-themed books, including Star Trek: The Book of Lists, as well as thousands of trivia questions for Trivial Pursuit sets with brands such as The Walking Dead, Rick and Morty, The Golden Girls, Star Trek, Harry Potter, and more. He lives in Las Vegas.