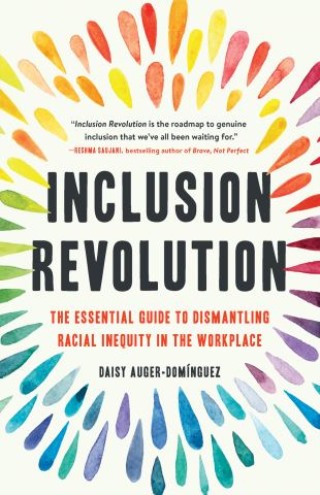 The Essential Guide to Dismantling Racial Inequity in the Workplace

We are in the midst of a global reckoning on race, and corporations are on high alert. But conventional approaches have fallen short, leaving nagging questions about next steps. Why do diversity trainings fail? What’s so wrong with a company’s “colorblind” workplace culture?

In Inclusion Revolution, Daisy Auger-Domínguez provides frank answers to why popular efforts fail. She then presents the definitive roadmap for revolution, through her dynamic step-by-step process: Reflect, Visualize, Act, and Persist. She offers proven, research-based strategies for racially inclusive management.

Racial inequality in the workplace is a problem we can solve. Inclusion Revolution offers the necessary tools for managers to address issues of race, power, and exclusion, to build change that lasts. Because through the best teams, companies can finally create a stronger future.

Daisy Auger-Domínguez: Daisy Auger-Domínguez is the chief people officer at Vice Media Group. She was formerly Google’s director of global diversity and inclusion strategy and global head of diversity staffing. She also served as the VP, talent acquisition and workforce diversity at Disney ABC Television Group, and she was the founder and CEO of Auger-Domínguez Ventures, a consultancy specializing in inclusive workplace culture theory and practice. She has earned a Community Service Leadership Award from the New York City Council and was named one of the 25 Most Powerful Women in People en Espanol. She lives in Brooklyn.