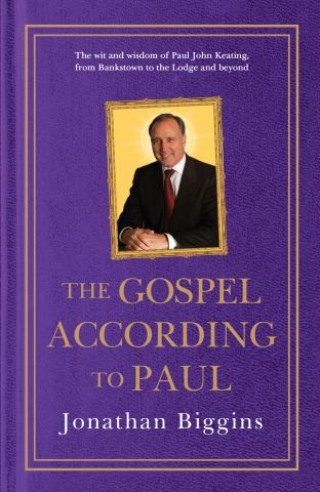 The Gospel According to Paul

My fellow irrelevant Australians. Never, in the history of our democracy, has Australian political life been in such a parlous state. There are people living in this country who have never seen true political leadership, having been governed in recent times by the dullest, most sanctimonious, hypocritical choir of patsies. This book will give them a woefully overdue idea of what a real leader looks like.

Leadership is not like a can of Popeye's spinach - you have to earn it. And earn it I did. And I am going to tell you how.

In The Gospel According to Paul, writer and satirist Jonathan Biggins draws on his award-winning play to harness the eviscerating wit, wisdom and confidence of Keating, showing us the evolution of Paul John Keating, from Bankstown to the Lodge and beyond. Almost the autobiography Keating said he would never write, it is a timely reminder of the political leadership we are sorely missing.

Jonathan Biggins is a character actor who has appeared for all the major state theatre companies in Australia. Highlights of his career include playing Peter Sellers in Ying Tong and Henry Carr in Tom Stoppard's Travesties, both for the Sydney Theatre Company. For Opera Australia, he played Koko in The Mikado; he toured Australia with Three Men and a Baby Grand, and his film and television work includes Thank God He Met Lizzie and A Few Best Men.

Jonathan has been a co-creator of the Wharf Revue for the Sydney Theatre Company since 2000. Other directing credits include Orpheus In The Underworld for Opera Australia, The Republic of Myopia, Noises Off and Talk for the STC, and the Australian touring production of the Broadway hit musical Avenue Q in 2009/2010. For children, Jonathan has directed the award-winning Pete the Sheep, Josephine Wants to Dance and Mr Stink.

Jonathan's fortnightly column for the Good Weekend magazine ran for seven years; he has written for journals and newspapers including The Age, Australian Traveller and Wine Selector Magazine. Jonathan's theatre writing collaborations include twenty-six Wharf Revue productions (Pennies from Kevin, Sunday in Iraq with George and Waiting for Garnaut to name a few), a new libretto adaptation of the opera Orpheus in the Underworld for Opera Australia, and two stage musicals: Living in the 70s and The Republic of Myopia. His first full-length play, Australia Day, premiered in 2012, followed by Talk for the STC in 2017, and his one-man show The Gospel According to Paul in 2019. Jonathan has also written three books: As it Were, The 700 Habits of Highly Ineffective People and, most recently, The 700 Habits of Highly Ineffective Parents.