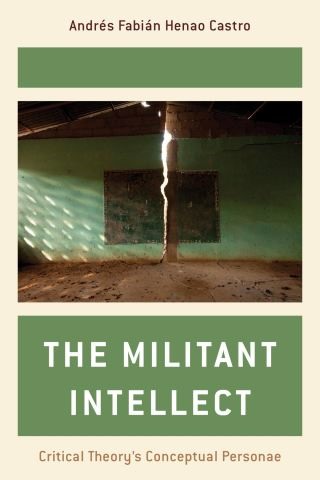 In this book Andrés Fabián Henao Castro argues that critical theory cultivates the militancy of the general intellect by training that intellect to work towards the intersectional and structural death of the colonist and thus to envision at the same time the materialization of that feminist decolonial communist queer marronage world that constitutes its horizon. Henao Castro borrows and expands on Gilles Deleuze and Félix Guattari’s idea of conceptual persona to qualify the intellectual labor of critical theory as an undisciplined field, that performs its labor through the creation of conceptual personae capable of subjectivizing critical thought. Doing so, The Militant Intellect argues for the indispensable reinterpretation of Plato’s Philosopher Sovereign, Karl Marx’s Communist, Frantz Fanon’s Rebel, Jacques Derrida’s Specter, Gayatri Spivak’s Subaltern, Saidiya Hartman’s Wayward Life, Jacques Rancière’s Ignorant Schoolmaster, Judith Butler’s Antigone/Ismene, and Jordy Rosenberg’s Fox as compelling personifications of intellectual militancy for the general intellect to have new scripts capable of cultivating the virtuosity of its more revolutionary performances.

Andrés Fabián Henao Castro: Andrés Fabián Henao Castro is Assistant Professor of Political Science at the University of Massachusetts Boston (UMB). Before joining UMB, he was the Karl Lowenstein Fellow at Amherst College, and currently holds a Post-Doctoral Fellowship at the Academy of Global Humanities and Critical Theory at the University of Bologna. His research deals with the relationships between ancient and contemporary political theory, via the prisms of decolonial theory, performance philosophy, and poststructuralist Marxism.