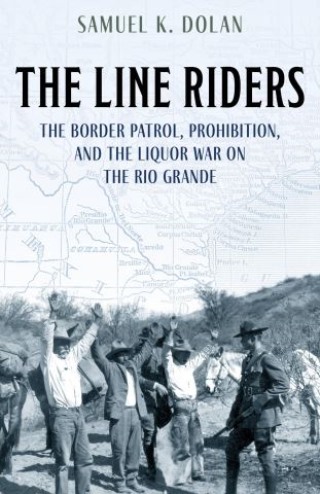 The Border Patrol, Prohibition, and the Liquor War on the Rio Grande

In January of 1920, the Eighteenth Amendment to the United States Constitution went into effect and the sale and manufacture of intoxicating spirits was outlawed. America had officially gone “dry.” For the next thirteen years, bootleggers and big city gangsters satisfied the country’s thirst with moonshine and contraband alcohol.

On the US-Mexico border, a steady stream of black market booze flowed across the Rio Grande. Tasked with combating the liquor trade in the borderlands of the American Southwest were the “line riders” of the United States Customs Service and their colleagues in the Immigration Border Patrol. From late-night shootouts on the Rio Grande and the back alleys of El Paso, Texas, to long-range horseback pursuits across the deserts of Arizona, this book tells the little-known story of the long and deadly “liquor war” on the border during the 1920s and 1930s and highlights the evolution of the Border Patrol amidst the chaos of Prohibition. Spanning a nearly twenty-year period, from the end of World War I to repeal of the Eighteenth Amendment and beyond, The Line Riders reveals an often overlooked and violent chapter in American history and introduces the officers that guarded the international boundary when the West was still wild.

Samuel K. Dolan is a documentary writer, director and Emmy Award-winning television producer. Growing up in Northern Arizona, Dolan got his start in film and television at age 13, riding horses in feature films and TV shows, including 1993’s Tombstone. Since 2004, Dolan has produced dozens of programs for History Channel, Military Channel, American Heroes Channel, and National Geographic.

In 2010, Dolan developed a series for National Geographic called Navajo Cops. For two years he led a camera team on patrol with the Navajo Tribal Police, and wrote four episodes of that seven-part series. He has also appeared as an on-camera expert in numerous segments for the History Channel and other cable networks.

Dolan’s Cowboys and Gangsters: Stories of an Untamed Southwest was published by TwoDot in 2016 and was listed as one of True West Magazine’s annual “Best of the West.” His follow-up book, Hell Paso: Life and Death in the Old West's Most Dangerous Town, was published by TwoDot in 2020. Dolan currently lives in Missoula, Montana with his wife and son.