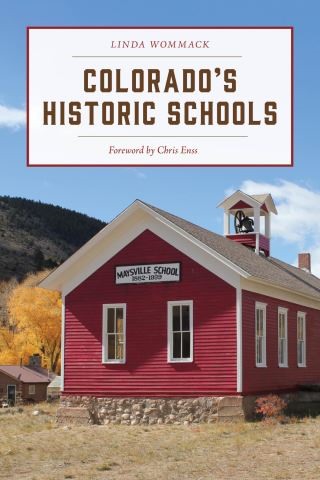 Construction of a school building reflected the importance of universal education and a community's desire to establish permanence in the ever-expanding Western frontier.

Since 1859 when Colorado's first one-room schoolhouse was established in Denver City, over six hundred school buildings have been built across the Centennial State. These schools were often the social centers of the community. Civic town meetings were held in them, as well as other political events. Some of these schoolhouses were still operating in rural communities through the 1950s. Today, these schools are the touchstones to Colorado’s pioneering past.

Colorado’s Historic Schools is part-regional history, and part-travel guide featuring over 140 of the most significant schools across the state, all recognized as historic landmarks. Along with interesting school stories and building descriptions, there are historic photos and stories of legendary teachers, tragedies, and even murder over the 150-year history of Colorado’s schools.

A Colorado native, Linda Wommack, is a Colorado historian and historical consultant. As an award winning author, she has written several books on Colorado history, including Growing Up With the Wild Bunch. She has also contributed to two anthologies concerning Western Americana. Linda’s writing has also appeared in True West Magazine,Wild West Magazine, and The Tombstone Epitaph. She is a longtime member of Women Writing the West, Western Writers of America, the state and national Cemetery Preservation Associations, the Gilpin County Historical Society, the national Wild West History Association and an honorary lifetime member of the Pikes Peak Heritage Society. She lives in Littleton, CO.