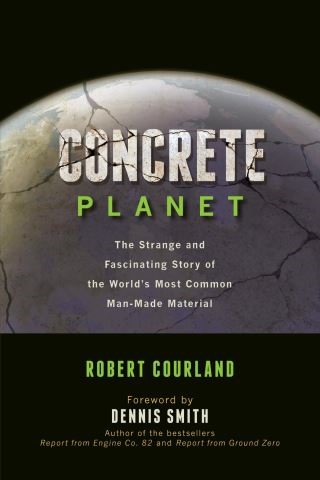 Concrete: We use it for our buildings, bridges, dams, and roads. We walk on it, drive on it, and many of us live and work within its walls. But very few of us know what it is. We take for granted this ubiquitous substance, which both literally and figuratively comprises much of modern civilization's constructed environment; yet the story of its creation and development features a cast of fascinating characters and remarkable historical episodes. Featuring a new epilogue on the Surfside condominium collapse and the current state of infrastructure in America, this book delves into this history, opening readers' eyes at every turn.

In a lively narrative peppered with intriguing details, author Robert Courland describes how some of the most famous personalities of history became involved in the development and use of concrete-including King Herod the Great of Judea, the Roman emperor Hadrian, Thomas Edison (who once owned the largest concrete cement plant in the world), and architect Frank Lloyd Wright. Courland points to recent archaeological evidence suggesting that the discovery of concrete directly led to the Neolithic Revolution and the rise of the earliest civilizations. Much later, the Romans reached extraordinarily high standards for concrete production, showcasing their achievement in iconic buildings like the Coliseum and the Pantheon. Amazingly, with the fall of the Roman Empire, the secrets of concrete manufacturing were lost for over a millennium. The author explains that when concrete was rediscovered in the late eighteenth century it was initially viewed as an interesting novelty or, at best, a specialized building material suitable only for a narrow range of applications. It was only toward the end of the nineteenth century that the use of concrete exploded. During this rapid expansion, industry lobbyists tried to disguise the fact that modern concrete had certain defects and critical shortcomings. It is now recognized that modern concrete, unlike its Roman predecessor, gradually disintegrates with age. Compounding this problem is another distressing fact: the manufacture of concrete cement is a major contributor to global warming. Concrete Planet is filled with incredible stories, fascinating characters, surprising facts, and an array of intriguing insights into the building material that forms the basis of the infrastructure on which we depend.

Robert Courland is the author of The Old North Waterfront, which won a special-achievement award from the California Heritage Council, and, with Walt Crowley, The Fairmont Hotel: The First Century of a San Francisco Landmark. He has also written magazine articles, television commercials, and screenplays.