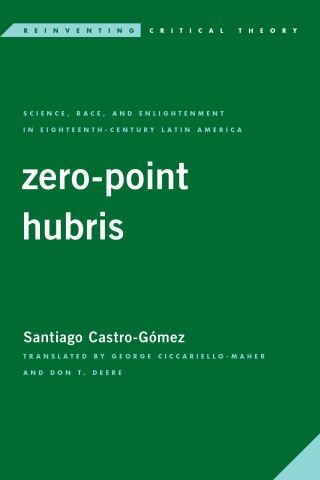 Operating within the framework of postcolonial studies and decolonial theory, this important work starts from the assumption that the violence exercised by European colonialism was not only physical and economic, but also ‘epistemic’. Santiago Castro-Gómez argues that toward the end of the eighteenth century, this epistemic violence of the Spanish Empire assumed a specific form: zero-point hubris. The ‘many forms of knowing’ were integrated into a chronological hierarchy in which scientific-enlightened knowledge appears at the highest point on the cognitive scale, while all other epistemes are seen as constituting its past. Enlightened criollo thinkers did not hesitate to situate the Black, Indigenous, and mestizo peoples of New Granada in the lowest position on this cognitive scale. Castro-Gómez argues that in the colonial periphery of the Spanish Americas, Enlightenment constituted not only the position of epistemic distance separating science from all other knowledges, but also the position of ethnic distance separating the criollos from the ‘castes’. Epistemic violence—and not only physical violence—is thereby found at the very origin of Colombian nationality.