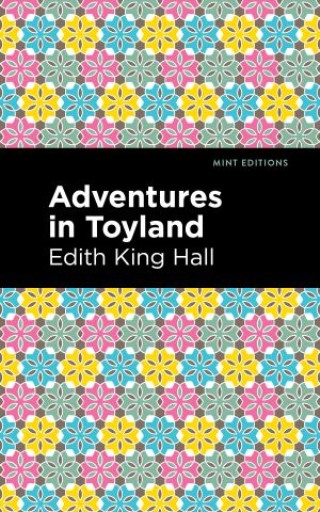 Adventures in Toyland (1897) is a children’s novel by Edith King Hall. The fifth of seven relatively unknown children’s novels by Edith King Hall is a quirky, fun, and incredibly original story for children and adults alike. Reminiscent of E. T. A. Hoffmann’s “The Nutcracker and the Mouse King,” Adventures in Toyland is an underappreciated classic from a master of Victorian fiction. “All sorts of toys were to be found in that toy-shop. It was truly a place to please any child! A little girl, who had come to stay there with her aunt—the owner of the shop—and her little cousin, was always to be found amongst the toys; she was forever picking up and admiring this one, stroking that one, nursing another. All her spare moments were spent in the shop.” While playing in her aunt’s toy shop, a young girl has a magical encounter with a mysterious Marionette, who informs her that the world of toys is just as real as the world of human beings. Given the chance to speak with the Marionette for two weeks—after which the toy will go silent forever—the young girl enjoys tales of conflict and adventure set in a wonderful kingdom of creatures and toys alike. From the tale of “The Rabbit and the Mouse” to the story of Belinda the wax doll and Jack, “the curly-headed Sailor-Boy,” Hall never ceases to astound. With a beautifully designed cover and professionally typeset manuscript, this edition of Edith King Hall’s Adventures in Toyland is a classic work of British children’s literature reimagined for modern readers.

Edith King Hall (1864-1933) was a British children’s author. Born in Sheerness, England, Hall was the daughter of a prominent officer in the Royal Navy. In the 1890s, she began writing novels for children, eventually publishing seven books through Glasgow-based press Blackie & Son. Hall never married, and while not much is known about her, she is regarded as a moderately successful author of juvenile fiction from the Victorian era.