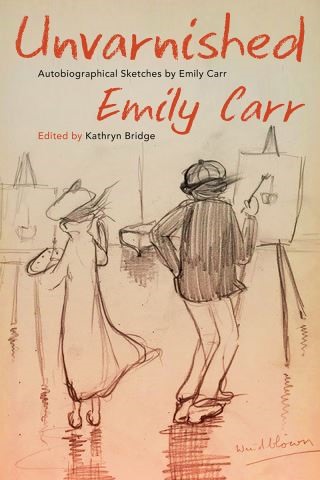 Culled from the hand-written pages in old-fashioned scribblers and almost-forgotten typescripts amid drafts for her published stories, Unvarnished features among the last unpublished and highly personal writings of the iconic Canadian author and artist Emily Carr.

This highly readable manuscript—edited by Royal BC Museum curator emerita Kathryn Bridge and illustrated with sketches and photographs from the BC Archives—spans nearly four decades, from 1899 to 1944. In an almost stream-of-consciousness outpouring of stories, Carr chronicles her early years as an art student in England, her life-altering sojourn in France and subsequent travels to Indigenous villages along the coast, her encounters with the Group of Seven, conversations with artist Lawren Harris, and her sketching trips in the “Elephant” caravan in the company of a quirky menagerie. Also included are stories written in hospital recovering from a stroke, a particularly vulnerable time in her life.

Emily Carr's books have remained in nearly continuous print since the 1940s. Unvarnished is a fresh addition to her enduring oeuvre, to be enjoyed as a complement to her other writings or as a jewel in its own right.