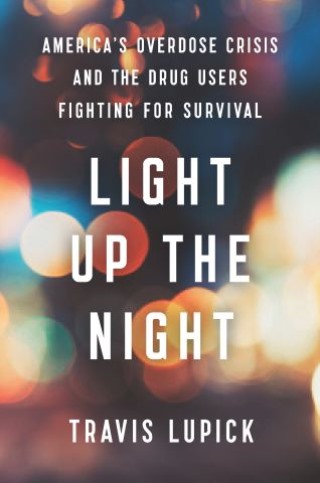 Light Up the Night

America’s Overdose Crisis and the Drug Users Fighting for Survival

A revelatory, moving narrative that offers a harrowing critique of the war on drugs from voices seldom heard in the conversation: drug users who are working on the front lines to reduce overdose deaths

Media coverage has established a clear narrative of the overdose crisis: In the 1990s, pharmaceutical corporations flooded America with powerful narcotics while lying about their risk; many patients developed addictions to prescription opioids; then, as access was restricted, waves of people turned to the streets and began using heroin and, later, the dangerous synthetic opioid fentanyl.

But that’s not the whole story. It fails to acknowledge how the war on drugs has exacerbated the crisis and leaves out one crucial voice: that of drug users themselves.

Across the country, people who use drugs are organizing in response to a record number of overdose deaths. They are banding together to save lives and demanding equal rights. Set against the backdrop of the overdose crisis, Light Up the Night provides an intimate look at how users navigate the policies that criminalize them. It chronicles a rising movement that’s fighting to save lives, end stigma, and inspire commonsense policy reform.

Told through embedded reporting focused on two activists, Jess Tilley in Massachusetts and Louise Vincent in North Carolina, this is the story of the courageous people stepping in where government has failed. They are standing on the front lines of an underground effort to help people with addictions use drugs safely, reduce harms, and live with dignity.

Travis Lupick: Travis Lupick is an award-winning journalist who has written for the Los Angeles Times, Los Angeles Review of Books, and VICE magazine, among others. The author of Fighting for Space: How a Group of Drug Users Transformed One City’s Struggle with Addiction and Light Up the Night: America’s Overdose Crisis and the Drug Users Fighting for Survival (The New Press), he lives in Southern California. Follow him on Twitter: @tlupick.