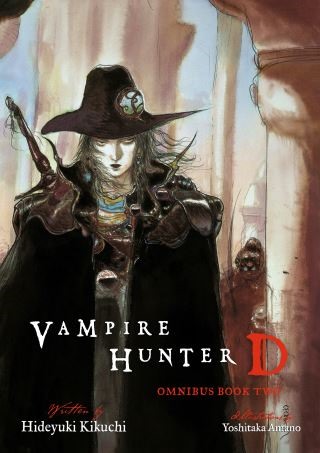 The hunt continues in the bizarre far future of 12,090 A.D, where the immortal vampire lords who were the only winners of mankind’s nuclear war still oppress the human survivors who have pushed the blood-drinking fiends back to the lawless Frontier. Yet humanity too remains as quick as ever to prey upon itself, and where the law can’t bring safety or justice, the crescent blade of D will—assuming you meet the half-vampire wanderer’s price!

A wondrous floating city, long a drifting sanctuary against marauding creatures, has its peace violently shattered by invasion…a village where humans and vampires live in harmony hangs upon the endless sleep of a beautiful dreamer, bitten decades past by the undead Nobility…a wizened crone named Granny Viper with a reputation for recovering abductees on the Frontier finds she’s chosen the wrong allies in rescuing a young girl. These are only the beginnings of the strange adventure stories into which steps Vampire Hunter D!

The Vampire Hunter D Omnibus Book Two collects volumes four, five, and six in author Hideyuki Kikuchi’s adventure horror series: Tale of the Dead Town, The Stuff of Dreams, and Pilgrimage of the Sacred and the Profane. Illustrated by Final Fantasy artist Yoshitaka Amano, the legend of D endures!

Hideyuki Kikuchi: Hideyuki Kikuchi is a Japanese author famous for his horror novels. His most famous works include the Vampire Hunter D series, Darkside Blues, and Wicked City. He has been compared to both Stephen King and H. P. Lovecraft. Kikuchi was born in Chōshi, Japan, on September 25, 1949. He attended Aoyama Gakuin University and was trained as a writer by famed author Kazuo Koike. His first novel, Demon City Shinjuku, was published in 1982. Kikuchi became close friends with writer and director Yoshiaki Kawajiri during his adaption of Wicked City and the two have since collaborated on Vampire Hunter D: Bloodlust and the OVA of Demon City Shinjuku.