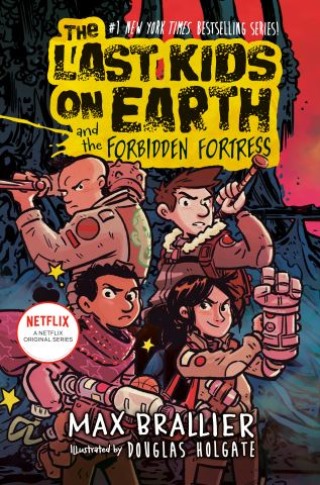 The Last Kids on Earth and the Forbidden Fortress

The highly-anticipated eighth book in the #1 New York Times, Wall Street Journal, and USA Today bestselling series, with over 10 million copies in print!

Picking up after Quint and Dirk's Hero Quest, the Last Kids are happily reunited—but quickly faced with a monstrous new mission. Inside an other-dimensional fortress, the evil Thrull, alongside a vile new villain, is carrying out a sinister plan. Jack, Quint, June and Dirk must make their own plans to infiltrate the stronghold before Thrull gets any closer to completing the mysterious Tower, a structure that could ultimately spell doom for this dimension.

Max Brallier: Max Brallier is a New York Times, USA Today, and Wall Street Journal bestselling author. His books and series include The Last Kids on Earth, Eerie Elementary, Mister Shivers, Galactic Hot Dogs, and Can YOU Survive the Zombie Apocalypse? He is a writer and producer for Netflix's Emmy-award-winning adaptation of The Last Kids on Earth. Max lives in Los Angeles with his wife and daughter. Visit him at MaxBrallier.com.

Douglas Holgate has been a freelance comic book artist and illustrator based in Melbourne, Australia, for more than ten years. He's illustrated books for publishers including HarperCollins, Penguin Random House, Hachette, and Simon & Schuster, and comics for Image, Dynamite, Abrams, and Penguin Random House.