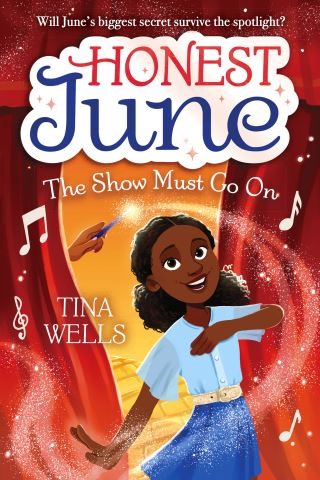 Honest June: The Show Must Go On

June can't tell a lie - and that made for a lot of drama even before she joined her school musical! Tween readers won't want to miss this relatable and magical new series. Honestly.

June has a hard time telling the truth when it isn't what people want to hear. But she's trying to be honest with herself, and auditioning for the school musical is a step in the right direction! It's what she wants -- even if her parents have other ideas.

But the drama is brewing offstage, too, and on the night of the play, June's secret blog is released to the whole school. ALL of the inner secrets that she's been desperate to keep to herself are unleashed! Will her friends and family forgive her for the lies? Or is her carefully-constructed life going to come crashing down?

Tina Wells: Tina Wells is the founder of RLVNT Media, a multimedia content venture serving entrepreneurs, tweens, and culturists with authentic representation. Tina has been recognized by Fast Company's 100 Most Creative People in Business, Essence’s 40 Under 40, Cosmopolitan’s Fun Fearless Phenom, and more. She is the author of nine books, including the bestselling tween fiction series Mackenzie Blue, its spinoff series, The Zee Files, and the marketing handbook, Chasing Youth Culture and Getting It Right.

Brittney Bond was born in sunny South Florida to a Jamaican family. A self-taught artist, she works primarily digitally with a passion for using appealing color palettes, intriguing lighting, and a magical and positive aura throughout her illustrations.