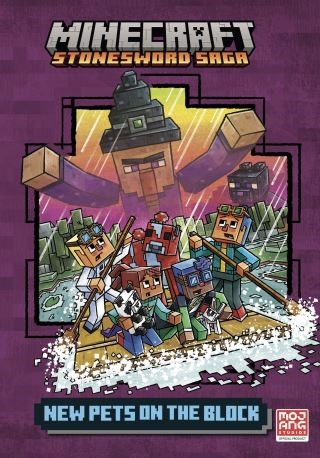 Based on the most popular video game of all time, the third book in the epic Minecraft Stonesword Saga series takes a group of intrepid Minecraft players deeper into the game than ever before . . .
Everyone knows that Jodi, the youngest member of the team, loves animals in the real world and in Minecraft. She is also fiercely loyal to her friend the Evoker King, who has, very unfortunately, been shattered into six different hostile mobs. When the third piece of the Evoker King takes the form of a Minecraft witch and sends Jodi and her friends on a quest to bring back an extremely rare animal mob, Jodi is determined to make sure that the mob stays safe no matter what!
Meanwhile, in the real world, she also learns that taking care of other living creatures is a much bigger responsibility than she ever imagined. Find out if Jodi and her friends have what takes to outwit a powerful witch and keep a bunch of unruly pets on the leash in this exciting new Minecraft adventure.

© 2022 Mojang AB. All Rights Reserved. Minecraft, the Minecraft logo and the Mojang Studios logo are trademarks of the Microsoft group of companies.

Nick Eliopulos: Nick Eliopulos is a writer who lives in Brooklyn (as many writers do). He likes to spend half his free time reading and the other half gaming. He cowrote the Adventurers Guild series with his best friend and works as a narrative designer for a small video game studio. After all these years, endermen still give him the creeps.


Alan Batson is a British cartoonist and illustrator. His works include Everything I Need to Know I Learned from a Star Wars Little Golden Book, Everything That Glitters is Guy!, and Spider-Ham. Being extremely fond of cubes and travel to exotic places, he has recently begun to lend his talents to several different books on adventures in the world of Minecraft.

Chris Hill is an illustrator living in Birmingham, England, with his wife and two daughters and has been loving it for twenty-five years! When he’s not working, he spends time with his family and trying to tire out his dog on long walks. If there’s any time left after that, he loves to go riding on his motorcycle, feeling the wind on his face while contemplating his next illustration adventure.