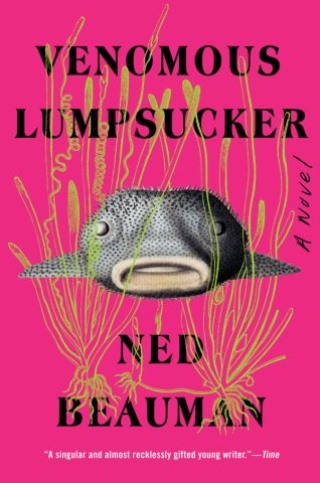 A dark and witty story of environmental collapse and runaway capitalism from the Booker-listed author of The Teleportation Accident.

The near future. Tens of thousands of species are going extinct every year. And a whole industry has sprung up around their extinctions, to help us preserve the remnants, or perhaps just assuage our guilt. For instance, the biobanks: secure archives of DNA samples, from which lost organisms might someday be resurrected . . . But then, one day, it’s all gone. A mysterious cyber-attack hits every biobank simultaneously, wiping out the last traces of the perished species. Now we’re never getting them back.

Karin Resaint and Mark Halyard are concerned with one species in particular: the venomous lumpsucker, a small, ugly bottom-feeder that happens to be the most intelligent fish on the planet. Resaint is an animal cognition scientist consumed with existential grief over what humans have done to nature. Halyard is an exec from the extinction industry, complicit in the mining operation that destroyed the lumpsucker’s last-known habitat.

Across the dystopian landscapes of the 2030s—a nature reserve full of toxic waste; a floating city on the ocean; the hinterlands of a totalitarian state—Resaint and Halyard hunt for a surviving lumpsucker. And the further they go, the deeper they’re drawn into the mystery of the attack on the biobanks. Who was really behind it? And why would anyone do such a thing?

Virtuosic and profound, witty and despairing, Venomous Lumpsucker is Ned Beauman at his very best.

Ned Beauman: Ned Beauman, who was named one of Granta’s Best of Young British Novelists in 2013, is the author of Boxer, Beetle (shortlisted for the Desmond Elliott Prize and winner of the Goldberg Prize for Outstanding Debut Fiction); The Teleportation Accident (longlisted for the Man Booker Prize and winner of the Somerset Maugham Award); Glow; and Madness Is Better than Defeat. Beauman has written for The New York Times, The Guardian, the London Review of Books, Esquire, and various other publications. He lives in London.