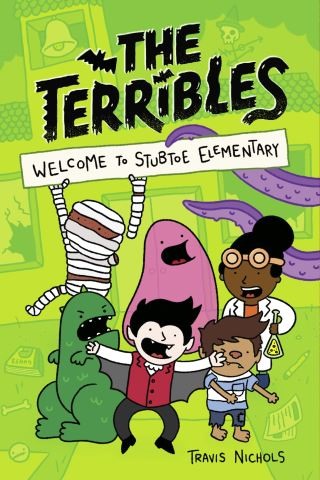 The Terribles #1: Welcome to Stubtoe Elementary

The Terribles might be monsters, but they're also kids just like you! Well, sort of. This hilarious peek into the world of vampires, mummies, swamp-things, and bigfoots is perfect for fans of the Hotel Transylvania movies.

Vampires, mummies, and gelatinous balls of goo (oh my!). That's right, monsters are real and they've settled down on the quiet island of Creep's Cove. It's a pretty typical place: houses, stores, portals to various nightmarish parallel dimensions. And a school for the kiddos.

Meet the crew:
Vlad, a fame-thirsty vampire,
Allie, a stuffed animal-dissecting alien,
Lizzie, a short-tempered kaiju,
and SO many others!

Told in alternating chapters, comics, poems, charts, and activities each focused on different classic spooky characters this story is the introduction to monsters you humans have been waiting for.

Travis Nichols: Travis Nichols is an author and illustrator of books and comics for kids. Books of his have been published by Penguin Random House, Chronicle, Macmillan, and Viz. He has written and illustrated comics for SpongeBob SquarePants, Uglydoll, Nickelodeon Magazine, and Hello Kitty. When not writing and drawing, Travis is making cool stuff, collecting hobbies, and spending quality time with his favorite people on earth.