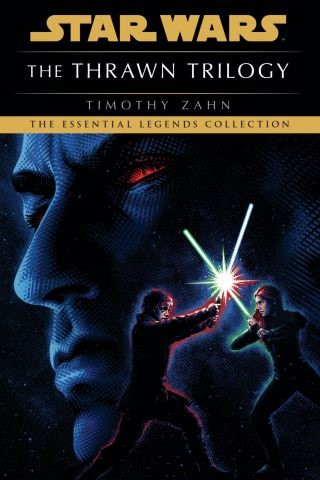 Heir to the Empire, Dark Force Rising, The Last Command

Following the events of Return of the Jedi: Star Wars: Episode VI, Luke Skywalker, Han Solo, and Princess Leia find themselves once again at the center of rebellion.

Five years after the Death Star was destroyed and Darth Vader and the Emperor were defeated, the galaxy is struggling to heal the wounds of war, Leia and Han are married and expecting twins, and Luke has become the first in a long-awaited line of new Jedi Knights.

But thousands of light-years away, the last of the Emperor’s warlords—the brilliant and deadly Grand Admiral Thrawn—has taken command of the shattered Imperial fleet, readied it for war, and pointed it at the fragile heart of the New Republic.

Meanwhile, Han and Lando Calrissian race against time to find proof of treason inside the highest Republic Council—only to discover instead a ghostly fleet of warships that could bring doom to their friends and victory to their enemies.

Yet most dangerous of all is a new Dark Jedi, risen from the ashes of a shrouded past, consumed by bitterness, and scheming to corrupt Luke to the dark side.

Timothy Zahn: Timothy Zahn is the author of more than sixty novels, nearly ninety short stories and novelettes, and four short-fiction collections. In 1984, he won the Hugo Award for Best Novella. Zahn is best known for his Star Wars novels (Thrawn, Thrawn: Alliances, Thrawn: Treason, Thrawn Ascendancy: Chaos Rising, Thrawn Ascendancy: Greater Good, Thrawn Ascendancy: Lesser Evil, Heir to the Empire, Dark Force Rising, The Last Command, Specter of the Past, Vision of the Future, Survivor’s Quest, Outbound Flight, Allegiance, Choices of One, and Scoundrels), with more than eight million copies of his books in print. Other books include StarCraft: Evolution, the Cobra series, the Quadrail series, and the young adult Dragonback series. Zahn has a BS in physics from Michigan State University and an MS from the University of Illinois. He lives with his family on the Oregon coast.