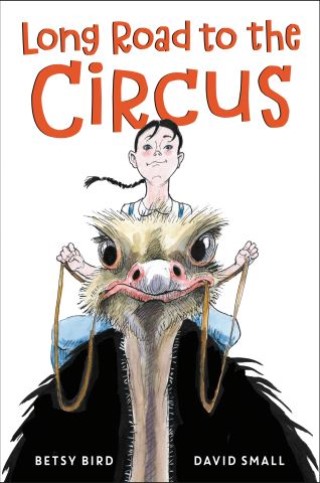 Long Road to the Circus

The story of a girl who rides an ostrich straight to her dreams from the award-winning writer and librarian Betsy Bird, illustrated by Caldecott Medalist David Small.

Twelve-year-old Suzy Bowles is tired of summers filled with chores on her family farm in Burr Oak, Michigan, and desperate to see the world. When her wayward uncle moves back home to the farm, only to skip his chores every morning for mysterious reasons, Suzy decides to find out what he's up to once and for all. And that's when she meets legendary former circus queen Madame Marantette and her ostriches. Before long, Suzy finds herself caught-up in the fast-paced, hilarious world of ostrich riding, a rollicking adventure that just might be her ticket out of Burr Oak.

Betsy Bird: Betsy Bird is the Collection Development Manager of the Evanston Public Library, and the former Youth Materials Specialist of New York Public Library. Betsy reviews for Kirkus, served on the 2007 Newbery Award committee, and her children's literature blog, A Fuse #8 Production, is hosted by School Library Journal. Her books include Funny Girl, an anthology of humorous stories, and the picture books Giant Dance Party and The Great Santa Stakeout. Betsy was born in Kalamazoo, Michigan, and now resides in Evanston, Illinois with her husband and offspring. Visit her at her blog, a Fuse #8 Production on slj.com, or follow her on twitter @FuseEight.

David Small won the Caldecott Medal in 2001 for So You Want to Be President and received two Caldecott honor awards. He is the author/illustrator of Imogene's Antlers, Ruby Mae Has Something to Say, and Stitches, a graphic novel memoir, which was a National Book Award finalist. He lives with his wife in Michigan in the very house in which Long Walk to the Circus is set. Visit him online at davidsmallbooks.com.