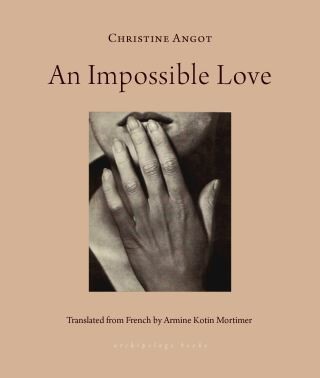 An agonizing turbulence lies just beneath the surface of this skillfully wrought novel by the French phenom who caused a sensation with the publication of her novel Incest.


Reaching back into a world before she was born, Christine Angot describes the inevitable encounter of two young people at a dance in the early 1950s: Rachel and Pierre, her mother and father. Their love is acute. It twists around Pierre's decisive judgments about class, nationalism, and beauty, and winds its way towards dissolution and Christine's own birth. Though it's Pierre whose ideas are most often voiced, it's Rachel who slowly comes into view, her determination and patience forming a radiant, enigmatic disposition. Equal parts subtle and suspenseful, An Impossible Love is an unwavering advance toward a brutal sequence of events that mars both Christine's and Rachel's lives. Angot the author carves Angot the narrator out of this corrosive element, exposing an unmendable rupture, and at the same time offering a portrait of a striking, ineradicable bond between mother and daughter.

Christine Angot: CHRISTINE ANGOT is one of the most controversial authors writing today in France. Since the 1999 publication of Incest, Angot has remained at the center of public debate and has continued to push the boundaries of what society allows an author to express. Born in 1958 in Châteauroux, Angot studied law at the University of Reims and began writing at the age of 25. Her literary works have received prizes including the Prix France Culture in 2005 (for Les Désaxés and Une partie du cœur), the Prix Flore in 2006 (for Rendez-vous) and the Prix Sade in 2012 (for Une semaine de vacances), which she refused on the grounds that the theme of the prize did not correspond to the book she had written. In 2015 she won the Prix Décembre for her novel Un Amour impossible. Angot is now also a commentator on the television show On n'est pas couché.

ARMINE KOTIN MORTIMER is the translator of Philippe Sollers's Mysterious Mozart (University of Illinois Press, 2010) and his Casanova the Irresistible (Illinois, 2016), as well as Julia Kristeva's The Enchanted Clock (Columbia University Press, 2017). Her long career as a professor of French literature occasioned many scholarly books and articles, as well as recognition by the French government with the Palmes Académiques in 2009.