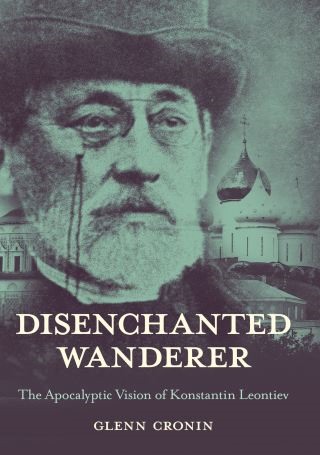 The Apocalyptic Vision of Konstantin Leontiev

Disenchanted Wanderer is the first comprehensive English-language study in over half a century of the life and ideas of Konstantin Nikolaevich Leontiev (1831–1891), one of the most important thinkers in nineteenth-century Russia on political, social, and religious matters. Glenn Cronin gives the reader a broad overview of Leontiev's life and varied career as novelist, army doctor, diplomat, journalist, censor, and, late in life, ordained monk.

Reviewing Leontiev's creative work and his writing on aesthetics and literary criticism—notable figures such as Belinsky, Turgenev, Gogol, Dostoevsky, and Tolstoy appear—Cronin goes on to examine Leontiev's sociopolitical writing and his theory of the rise and fall of cultures and civilizations, placing his thought in the context of his contemporaries and predecessors including Hegel, Herzen, and Nietzsche, as well as Danilevsky, Pobedonostsev, and other major figures in Slavophile and Russian nationalist circles.

Cronin also examines Leontiev's religious views, including his ascetic brand of Orthodoxy, informed by his experiences of the monastic communities of Mount Athos and OptinaPustyn, and his late attraction to Roman Catholicism under the influence of the theologian Vladimir Solovyev. Disenchanted Wanderer concludes with a review of Leontiev's prophetic vision for the twentieth century and his conviction that, after a period of wars, socialism would triumph under the banner of a new Constantine the Great. Cronin considers how far this vision foretold the rise to power of Joseph Stalin, an aspect of Leontiev's legacy that previously had not received the attention it merits.

Elevating Leontiev to his proper place in the Russian literary pantheon, Cronin demonstrates that the man was not, as is often maintained, an amoralist and a political reactionary but rather a deeply moral thinker and a radical conservative.

Glenn Cronin is contributing author to Ideology in Russian Literature. He holds a PhD in Russian studies from University of London. He retired recently from a career with the Department of Transportation in the United Kingdom.