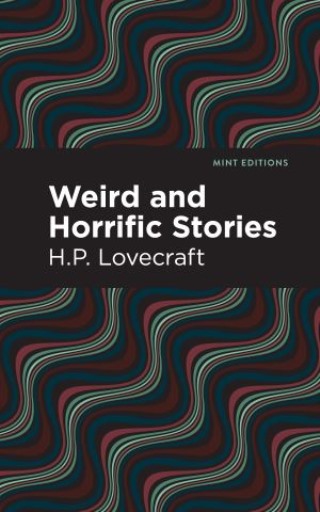 Weird and Horrific Stories (2021) collects some of H. P. Lovecraft’s finest early work. Although his reputation as one of the world’s greatest writers of horror and weird fiction remains undisputed, much of his writing was published in such pulp literary magazines as Argosy, the United Amateur, and Weird Tales, making it difficult to find proper collections. Weird and Horrific Stories attempts to bridge this gap for modern readers, bringing them face to face with some of Lovecraft’s most terrifying creations.

“The Alchemist,” originally written in 1908 and published in 1916, is the story of Count Antoine, whose ancestors were cursed after killing a fearsome dark wizard named Michel Mauvais. Every generation since has seen the death of its male members at the age of thirty-two, an age fast approaching for Antoine. Lonely and terrified, he sets out to put an end to the cycle of death and suffering. “Dagon,” which appeared in The Vagrant in 1919, is a story told by a morphine-addicted man who survived a terrible shipwreck during the First World War. In “The Cats of Ulthar,” published in 1920, an unnamed narrator recounts the legal history of the town of Ulthar, which once was the home to a sadistic couple known for their obsession with torturing and killing housecats. Weird and Horrific Stories collects over thirty stories written at the height of Lovecraft’s career.

With a beautifully designed cover and professionally typeset manuscript, this edition of H. P. Lovecraft’s Weird and Horrific Stories is a classic work of American horror reimagined for modern readers.

H. P. Lovecraft (1890-1937) was an American author of science fiction and horror stories. Born in Providence, Rhode Island to a wealthy family, he suffered the loss of his father at a young age. Raised with his mother’s family, he was doted upon throughout his youth and found a paternal figure in his grandfather Whipple, who encouraged his literary interests. He began writing stories and poems inspired by the classics and by Whipple’s spirited retellings of Gothic tales of terror. In 1902, he began publishing a periodical on astronomy, a source of intellectual fascination for the young Lovecraft. Over the next several years, he would suffer from a series of illnesses that made it nearly impossible to attend school. Exacerbated by the decline of his family’s financial stability, this decade would prove formative to Lovecraft’s worldview and writing style, both of which depict humanity as cosmologically insignificant. Supported by his mother Susie in his attempts to study organic chemistry, Lovecraft eventually devoted himself to writing poems and stories for such pulp and weird-fiction magazines as Argosy, where he gained a cult following of readers. Early stories of note include “The Alchemist” (1916), “The Tomb” (1917), and “Beyond the Wall of Sleep” (1919). “The Call of Cthulu,” originally published in pulp magazine Weird Tales in 1928, is considered by many scholars and fellow writers to be his finest, most complex work of fiction. Inspired by the works of Edgar Allan Poe, Arthur Machen, Algernon Blackwood, and Lord Dunsany, Lovecraft became one of the century’s leading horror writers whose influence remains essential to the genre.