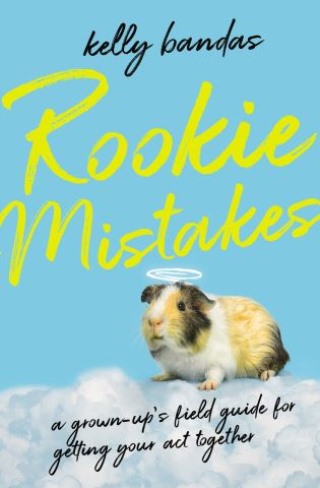 A Grown-Up's Field Guide for Getting Your Act Together

In her highly anticipated nonfiction debut, comedian Kelly Bandas uses her trademark humor to recount stories of growing up and becoming a semifunctional adult in a dysfunctional world.

Raised in a devoutly Catholic home, Kelly Bandas spent her entire childhood trying hard not to tick off “the man” or the Lord. And for the most part, she crushed it. But as she got older and began to navigate what it looked like to truly live in a world where gender roles, race, and politics weren’t always so black and white, Kelly realized that her former worldview was beginning to feel like that pair of Forever 21 jeans that used to glide effortlessly over her hips but now required a lot of stretching and acrobatic maneuvering to shimmy into place. And she’s not alone.

In Rookie Mistakes, Kelly shares stories of growing up in a church-centered, male-dominated society and how those experiences shaped and primed her for a new chapter of life. In this debut collection of essays, Kelly shares:

Kelly shares everything from laugh-out-loud accounts of Oregon Trail-themed first kisses to heartfelt insights gleaned from navigating life as a Christian feminist doing her best not to screw up being a parent of a child with a disability, in a trans-racial family.

Rookie Mistakes is the call-to-action millennial women everywhere have been waiting for.

Kelly Bandas is a writer and comedian best known for her popular Instagram and TikTok videos satirizing everything from millennial motherhood to social media culture. Her work can be found literally anywhere you have an internet signal (if your internet isn’t working, try turning off the wifi and then turning it back on again . . . or honestly, it could be your router.) Whether she’s hosting her not-at-all dorky Outlander support group or speaking up about things that really matter, Kelly’s mission is to always empower and lift up other women through community, inclusivity, and laughter.