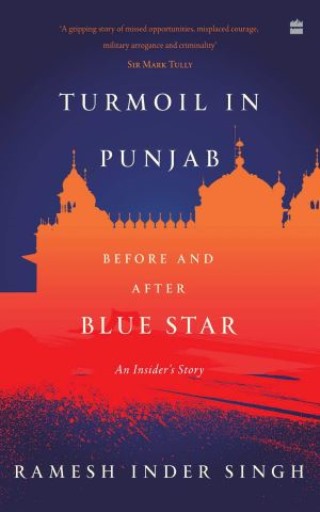 Punjab went through a politically turbulent period between 1978 and 1994, triggered by the rift between Sikhs and Nirankaris, and fuelled by the operations Blue Star, Woodrose and Black Thunder I and II. Narrated as an eyewitness account by Ramesh Inder Singh, then the district magistrate of Amritsar, and later the chief secretary of Punjab, this book affords an insider's view of the events that ignited the strife and created the socio-political fault lines that divided Punjab in those years. It also describes the terrorist violence in Punjab, the state response to the military operations, the death of thousands of innocent citizens, the shocking assassination of Prime Minister Indira Gandhi and the subsequent lynching of close to 3,000 Sikhs in the national capital of Delhi, which set in motion a devastating ethno-national movement in Punjab.

Based on extensive research and first-hand accounts of those who lived through those volcanic years, Turmoil in Punjab: Before and After Blue Star is an eye-opening narrative of the genesis of the Punjab conflict, the rise of radicalism and the Khalistanis, and the elimination of militancy from the state.

Ramesh Inder Singh: Ramesh Inder Singh is a distinguished civil servant of the Punjab cadre and a recipient of the Padma Shri (1986) for his contributions to public administration.
He was the district magistrate of Amritsar from 1984 to 1987, and dealt with the tumultuous situation in Punjab in those years. The various army operations against militancy, including Operation Blue Star, Operation Woodrose and Operation Black Thunder-1, were conducted during this period.
In his forty-year career, he has held many crucial appointments. He was principal secretary to the chief minister of Punjab for five years, the chief secretary of Punjab for more than two years and from that position he took premature retirement from the IAS in 2009 to serve for five years as the chief information commissioner of Punjab. He has also worked with the World Bank as a consultant. Currently, he leads a retired life.