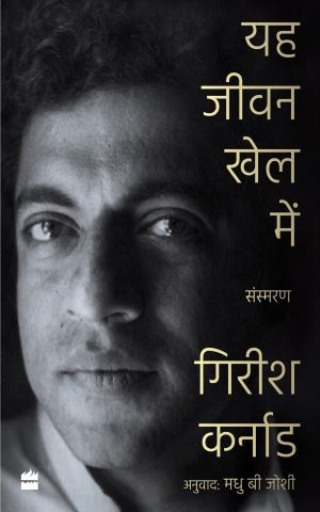 Girish Karnad was one of modern India's greatest cultural figures: an accomplished actor, a path-breaking director, an innovative administrator, a clear-headed and erudite thinker, a public intellectual with an unwavering moral compass, and above all, the most extraordinarily gifted playwright of his times.

Ye Jeevan Khel Mein, the Hindi translation of Karnad's memoirs, This Life at Play, covers the first half of his remarkable life - from his childhood in Sirsi and his early engagement with local theatre, his education in Dharwad, Bombay and Oxford, to his career in publishing, his successes and travails in the film industry, and his personal and writerly life.

Moving and humorous, insightful and candid, these memoirs provide an unforgettable glimpse into the life-shaping experiences of a towering genius, and a unique window into the India in which he lived and worked.

Girish Karnad: Girish Karnad (1938–2019) was a playwright, actor and director. His notable plays include, among others, Yayati, Tughlaq, Hayavadana, Naga-Mandala and The Dreams of Tipu Sultan. He worked in films and in TV across various languages – Kannada, Hindi, Tamil, Telugu, Malayalam, English and Assamese – and in a number of capacities, including as actor, screenwriter and director. He served as director of the Film and Television Institute of India (1974–75), chairman of the Sangeet Natak Akademi (1988–93), and director of the Nehru Centre, London (2000–3). His work brought him numerous honours, including multiple National Film Awards and Filmfare Awards, the Kalidas Samman, the Sangeet Natak Akademi Award, the Padma Shri, the Padma Bhushan and the Jnanpith Award.