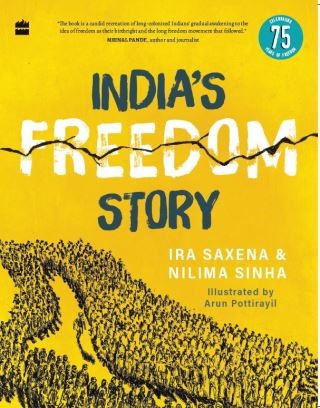 A BOOK THAT CELEBRATES 75 YEARS OF INDIA'S INDEPENDENCE!

This book brings alive the key events of the freedom struggle such as:

India's Freedom Story also explores the broader idea of freedom and what it means to today's youth.

This brilliantly illustrated book includes contemporary events from India and beyond such as the recent Black Lives Matter Movement, and also focuses on inspiring figures like Martin Luther King Jr., Nelson Mandela and Gamal Abdel Nasser, among others and newer activists such as Greta Thunberg, who used Gandhian methods to fight for their rights.

"The entire history of India's struggle for freedom comes alive in this extensively researched volume... A wonderful gift from the authors to today's children."

A child psychologist, writer and critic of children's books, Ira Saxena has written fiction and non-fiction in Hindi and English for children of all ages and adults. Her writings are mostly based on themes such as computer crime, science fiction and Gandhism. She received the Shankar's Silver Medal for Writing in 1996 for Gajmukta ki Talaash (Quest for the Jumbo Pearl) – an adventure set in India's freedom struggle, and also won the White Raven's selection at the International Youth Library in 2000 for her computer crime novel The Virus Trap. Many of her short stories have been awarded by publications such as Amar Chitra Katha and Saptahik Hindustan. Her books have found a place in schools as supplementary readers. Her recent novels include Curse of Grass, The Web Trail, Chand Katori and Paraa. Saxena is the founding member and Secretary of the Association of Writers and Illustrators for Children (AWIC). She has also been a member of the International Board on Books for Young People (IBBY). A firm believer in the healing touch of literature, Saxena is spearheading a book therapy project among teachers and authors. She can be reached at saxena.ira@gmail.com

Nilima Sinha is a well-known author for children, who has written several award-winning books, such as The Chandipur Jewels which won a Best Fiction award and The Yellow Butterfly which received a Best Picture book award. Her books have been included in the International White Ravens catalogue by the International Youth Library. She writes in both English and Hindi. Sinha has worked on the Marigold series produced by NCERT as English textbooks for schools in India. Her book, Hamirpur ke Khandahar was prescribed as a Supplementary Reader in Hindi for all government schools in the Delhi region. Her schooling at the Convent of Jesus and Mary, New Delhi, inspired her interest in literary writing. She is the President of the Association of Writers and Illustrators for Children (AWIC), the Indian branch of the International Board on Books for Young People (IBBY). In the past, she has also held the post of Vice-President of IBBY. She can be reached at sinhan2008@gmail.com.