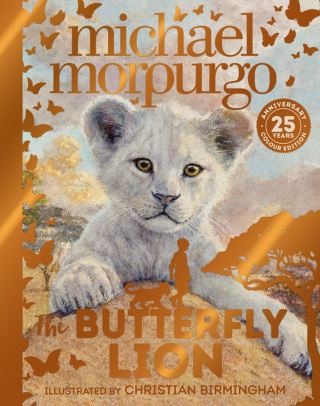 Celebrating the twenty-fifth anniversary of the stunning, classic story of an unforgettable friendship with a glorious colour gift edition, fully illustrated by Christian Birmingham.

“All my life I’ll think of you, I promise I will. I won’t ever forget you.”

Bertie rescues an orphaned white lion cub from the African veld. They are inseparable until Bertie is sent to boarding school far away in England and the lion is sold to a circus. Bertie swears that one day they will see one another again, but it is the butterfly lion which ensures that their friendship will never be forgotten.

From master storyteller Michael Morpurgo, this extraordinary tale of friendship, loyalty and overcoming adversity has spoken to readers the world over since it was first published twenty-five years ago. This stunning colour gift book, with new illustrations from Christian Birmingham, will be treasured by a new generation of children.

Michael Morpurgo OBE is one of Britain's best loved writers for children, with sales of over 35 million copies. He has written over 150 books, has served as Children’s Laureate, and has won many prizes, including the Smarties Prize, the Writers Guild Award, the Whitbread Award, the Blue Peter Book Award and the Eleanor Farjeon Lifetime Achievement Award. With his wife, Clare, he is the co-founder of Farms for City Children. Michael was knighted in 2018 for services to literature and charity.