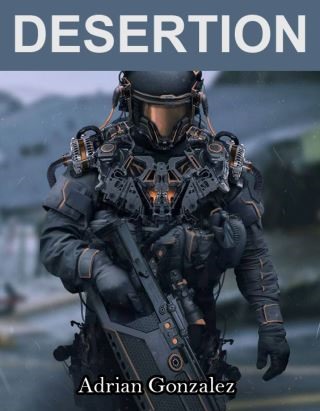 A rookie is promoted after performing a great feat by eliminating an alien nest. Ovated by all his teammates after receiving the medal of honor, he is transferred to the special team. His mission, the destiny of humanity. In a last attack forced by the allies to finally finish with the Tungs. But what would become of us if everything they tell us is a lie. To discover the truth in a war. To have in the hands the absolute truth written by an enemy. Could you decide who is the good and who is the evil? We all make decisions, the young legend should make only one, as a result of the extinction of the human race.

Adrián Gonzalez: I grew up like every child full of dreams. I wanted to be a cartoonist for the cartoons I watched. I dreamed of meeting the authors, I didn't know that was in Japan. The naivety of a seven year old child is like that, isn't it? My older brother opened my eyes and crushed my dreams a little bit. I drew incessantly until I was a teenager, when the world of the role caught up with me. Sometimes I thought I was an evil dark elf, sometimes an evil orc, sometimes I was an evil wizard, in fact I was always evil. That's why I ended up being the game director. I was terrifyingly evil, plus I knew my own game. I had connected with the players in a wonderful way as I was the one who created the rules, paths, stories, map, mouses. Nobody could direct it better than me without studying it first (what a fiasco, I always wanted to play it), the truth was very shy to talk and I had problems with pronunciation (they are still there, that's why I write), but with friends it was different.
We all became adults at some point in our lives and that was over, too quickly, as with all good things. In times to come the future held my super imaginary mind boring jobs in factories and offices. Once I tried to escape from the routine madness by going to college, comic book design was the career I had chosen for the great adventure. The excitement lasted as long as the body can at the age of twenty-four, the pace of sleeping only three hours a day went up to two years of forced travel to the capital. It was not all time lost, but an investment that I am grateful to have made to this day. Two points lead to this: I met a great scriptwriter from my country (Argentina), who opened the doors of literature with a project I thought of presenting in his field. The second is to take the leap from boring work and dedicate myself to novels. Now I have been torturing the characters I create for several years. Those super-obstinate heroes in saving them all go through the cruelty of those who speak