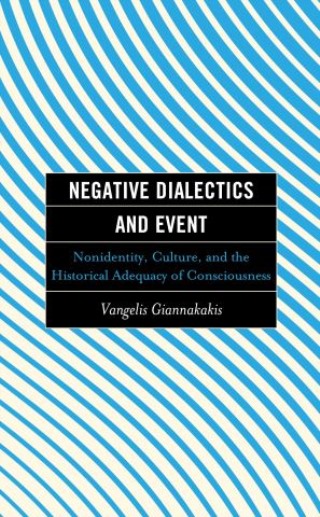 Nonidentity, Culture, and the Historical Adequacy of Consciousness

History is replete with false and unfulfilled promises, as well as singular acts of courage, resilience, and ingenuity. These episodes have led to significant changes in the way people think and act in the world or have set the stage for such transformations in the form of rational expectations in theory and the hopeful anticipations of dialectical imagination.

Negative Dialectics and Event: Nonidentity, Culture, and the Historical Adequacy of Consciousness revisits some of Theodor W. Adorno’s most influential writings and theoretical interventions to argue not only that his philosophy is uniquely suited to bring such events into sharp relief and reflect on their entailments but also that an effective historical consciousness today would be a consciousness awake to the events that interpellate and shape it into existence.

More broadly, Vangelis Giannakakis presents a compelling argument in support of the view that the critical theory developed by the first generation of the Frankfurt School still has much to offer in terms of both cultivating insights into contemporary human experience and building resistance against states of affairs that impede human flourishing and happiness.