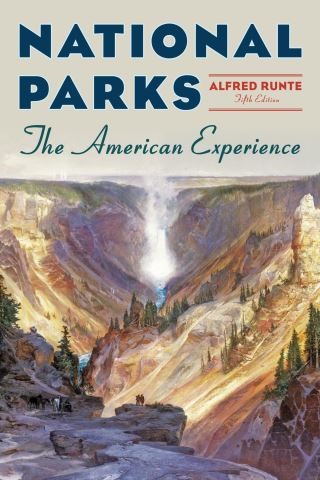 Revised with a new epilogue, “We the People,” this fifth edition of National Parks: TheAmerican Experience continues the highly engaging story of how Americans invented and expanded the concept of national parks. A prominent adviser to the Ken Burns Emmy Award-winning documentary, "The National Parks: America's Best Idea," Alfred Runte is renowned as the nation's leading historian on the meaning and management of these treasured lands. Further supported with period photographs and now twelve pages of color paintings, National Parks remains a stirring look into the lands that define America, from Yosemite and Yellowstone to wilderness Alaska. This is how we got our parks, and looking to the future, the challenges that remain in preserving them. Are “we the people” still up to the task? Yes, this history advises, but only if we consistently cherish the national unity that our commitment to the parks further demands.

ALFRED RUNTE traces his interest in the national parks to a family camping trip in 1959. Twenty years later, and having earned his PhD at the University of California, Santa Barbara, he published the first edition of National Parks: The American Experience. His noted sequel, Yosemite: The Embattled Wilderness, sealed Runte’s reputation as America’s preeminent historian of the national parks. A forthcoming Chinese translation of National Parks further speaks to his influence around the globe. “Civilization is the problem parks solve,” Runte concludes. Where there is civilization there has followed the need for parks, whose protection, both here and abroad, continues to be advanced by this timeless history.