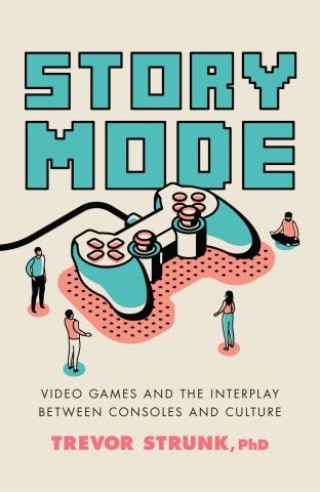 Video Games and the Interplay between Consoles and Culture

Once considered niche, fringe, and the hobby of only outsiders or loners, video games have rapidly become one of the most popular and influential artistic forms of this century. Their imagery is near ubiquitous—children, adults, and even professional athletes know what a Fortnite dance is without having played the game, and every conversation about violence in media eventually turns toward Grand Theft Auto. We’ve reached a point where, through streaming platforms like Twitch, games don’t even need to be played to be enjoyed, as whole robust communities form around watching others play. Games have grown into more than just products; they’re touchstones, meaning that they’ve become popular enough for something radical to have happened: even while culture shapes our games, games have simultaneously begun shaping our culture.

In Story Mode, video games critic and host of the No Cartridge podcast Trevor Strunk traces how some of the most popular and influential game series have changed over years and even decades of their continued existence and growth. We see how the Call of Duty games—once historical simulators that valorized conflicts like World War II—went “modern,” complete with endless conflicts, false flag murders of civilians, and hyperadvanced technology. It can be said that Fortnite’s runaway popularity hinges on a competition for finite resources in an era of horrific inequality. Strunk reveals how these shifts occurred as direct reflections of the culture in which games were produced, thus offering us a uniquely clear window into society’s evolving morals on a mass scale.

Story Mode asks the question, Why do video games have a uniquely powerful ability to impact culture? Strunk argues that the participatory nature of games themselves not only provides players with a sense of ownership of the narratives within, but also allows for the consumption of games to be a revelatory experience as the meaning of a game is oftentimes derived by the manner in which they are played.

Combining sharp criticism of our most beloved and well-known video game series with a fascinating discussion of how our cultural values form, Story Mode is a truly original examination of the unique space games now occupy, from one of the sharpest games critics working today.

Trevor Strunk, PhD, is the host of No Cartridge, a progressive podcast that critically analyzes video games and the conditions of the games industry. He holds a PhD in English from the University of Illinois at Chicago, with a focus on contemporary American literature and emergent forms. His writing on video games and other media has appeared in The Outline, Los Angeles Review of Books, Giant Bomb, Electronic Gaming Monthly, and other publications. He can be found on Twitter at the handle @hegelbon. He currently teaches English at DeSales University, and lives with his wife and two delightful if energetic children outside of Philadelphia.