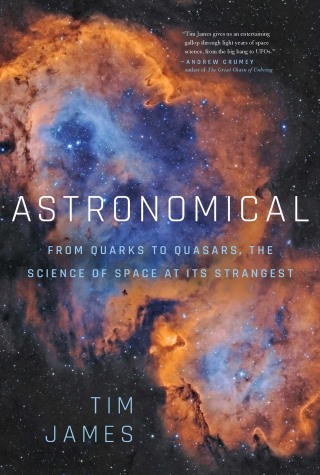 From Quarks to Quasars: The Science of Space at its Strangest

Guiding us through Einstein's theory of relativity, quantum mechanics, and string theory, Astronomical explains the baffling mysteries of the cosmos: from alien life to the zodiac; from white holes to wormholes; from quasars to quark stars—all within a narrative that is as entertaining as it is edifying.

Does the Big Bang prove the existence of God? What's the Universe expanding into? Is Earth the only planet which supports life?

Space is the biggest, oldest, hottest, coldest, strangest thing a human can study. It's no surprise then, that the weirdest facts in science (not to mention the weirdest scientists themselves) are found in astrophysics and cosmology.

If you're looking for instructions on how to set up your grandad's telescope this book probably isn't for you. In Astronomical, Tim James takes us on a tour of the known (and unknown) universe, focusing on the most-mind boggling stuff we've come across, as well as unpacking the latest theories about what's really going on out there.

Guiding us through Einstein's relativity, quantum mechanics and string theory, Astronomical delves into the baffling corners of the cosmos and tackles the biggest mysteries we face: from alien life to the zodiac; from white holes to wormholes; from quasars to quark stars. This is the science of space at its absolute strangest.

Tim James: Tim James is a secondary-school science teacher, YouTuber, blogger, and Instagrammer. Raised by missionaries in Nigeria, he fell in love with science at the age of fifteen and refuses to get over his infatuation. After graduating with a Master’s degree in chemistry, specializing in computational quantum mechanics, he decided to get straight into the classroom. He lives in England.