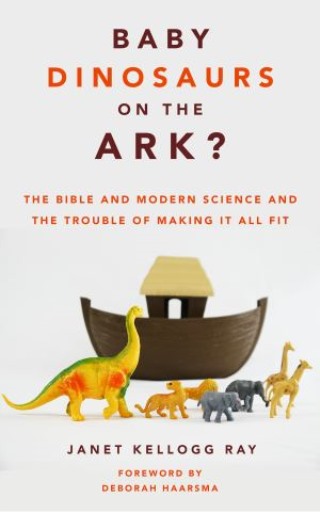 Baby Dinosaurs on the Ark?

A scientific look at creationism from a former creationist

A significant number of Americans, especially evangelical Christians, believe Earth and humankind were created in their present form sometime in the last 10,000 years or so—the rationale being that this is (presumably) the story told in the book of Genesis. Within that group, any threatening scientific evidence that suggests otherwise is rejected or, when possible, retrofitted into a creationist worldview.

But can this uncomfortable blend of biblical literalism and pseudoscience hold up under scrutiny? Is it tenable to believe that the Grand Canyon was formed not millions of years ago by gradual erosion but merely thousands of years ago by the Great Flood? Were there really baby dinosaurs with Noah on his ark?

Janet Kellogg Ray, a science educator who grew up a creationist, doesn’t want other Christians to have to do the exhausting mental gymnastics she did earlier in her life. Working through the findings of a range of fields including geology, paleontology, and biology, she shows how a literal interpretation of the book of Genesis simply doesn’t mesh with what we know to be reality. But as someone who remains a committed Christian, Ray also shows how an acceptance of the theory of evolution is not necessarily an acceptance of atheism, and how God can still be responsible for having created the world, even if it wasn’t in a single, momentary, miraculous event.

Janet Kellogg Ray:
Janet Kellogg Ray is an enthusiastic science educator, explainer, and communicator. She holds a PhD in curriculum and instruction, with fifteen years of university teaching, both biology majors and nonmajors. Raised a creationist, Janet is a science educator and a practicing Christian who accepts evolution. She is uniquely equipped to explain evolution to questioners, doubters, deniers, and those who just want to know more about the science of origins: she's been there, and she understands.