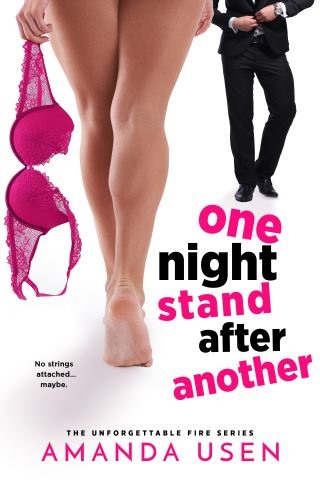 One Night Stand After Another

Clara Duke lives to crochet wearable art. But right this second, she’s looking at the one guy who has the uncanny ability to unravel her in every possible way. Zane Brampton. He broke her heart in high school and now wants to make it up to her—in a single night. Just being in the same room as him feels dangerously volatile. A whole night with this delectable, gorgeous man would be nothing less than a total sexpocalypse. But oh, what a way to go.

The sight of Clara and her mouthwatering curves might actually kill restaurateur Zane. Ten years ago, their volcanic chemistry exploded… taking their social circle along with it. But Zane hasn’t forgotten the heat—and this feels almost like fate. He’ll be damned if he’ll let her run from their connection again. And he might just have found his chance to prove he deserves more than just one night…

Now Zane is driving Clara to California to meet her professional dreams. But between the road, the chocolate, and the ridiculously hot sex, Clara risks getting tangled up with her not-so-one-night-stand. And worse, Zane might just be the thread that snaps all of her perfectly crocheted plans.

Amanda Usen: Amanda Usen knows two things for certain: chocolate cheesecake is good for breakfast and a hot chef can steal your heart. Her husband stole hers on the first day of class at the Culinary Institute of America. Amanda spends her early mornings writing romance and the rest of the day working in a bakery. When she’s not writing or decorating cakes, she can usually be found reading a book and trying to get out of cooking dinner.