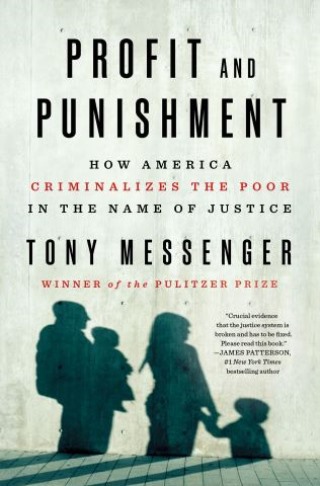 How America Criminalizes the Poor in the Name of Justice

In Profit and Punishment, a Pulitzer Prize-winning journalist exposes the tragedy of modern-day debtors prisons, and how they destroy the lives of poor Americans swept up in a system designed to penalize the most impoverished.

“Intimate, raw, and utterly scathing” — Heather Ann Thompson, Pulitzer Prize-winning author of Blood in the Water
“Crucial evidence that the justice system is broken and has to be fixed. Please read this book.” —James Patterson, #1 New York Times bestselling author

As a columnist for the St. Louis Post-Dispatch, Tony Messenger has spent years in county and municipal courthouses documenting how poor Americans are convicted of minor crimes and then saddled with exorbitant fines and fees. If they are unable to pay, they are often sent to prison, where they are then charged a pay-to-stay bill, in a cycle that soon creates a mountain of debt that can take years to pay off. These insidious penalties are used to raise money for broken local and state budgets, often overseen by for-profit companies, and it is one of the central issues of the criminal justice reform movement.

In the tradition of Evicted and The New Jim Crow, Messenger has written a call to arms, shining a light on a two-tiered system invisible to most Americans. He introduces readers to three single mothers caught up in this system: living in poverty in Missouri, Oklahoma, and South Carolina, whose lives are upended when minor offenses become monumental financial and personal catastrophes. As these women struggle to clear their debt and move on with their lives, readers meet the dogged civil rights advocates and lawmakers fighting by their side to create a more equitable and fair court of justice. In this remarkable feat of reporting, Tony Messenger exposes injustice that is agonizing and infuriating in its mundane cruelty, as he champions the rights and dignity of some of the most vulnerable Americans.

Tony Messenger: Tony Messenger is the metro columnist for the St. Louis Post-Dispatch. In 2019, Messenger won the Pulitzer Prize for commentary for his series of columns on debtors' prisons in Missouri. In 2016, Messenger was awarded a Missouri Honor Medal, the highest award bestowed by the University of Missouri's School of Journalism. That same year he won a National Headliner for editorial writing. In 2015, Messenger was a Pulitzer finalist for his series of editorials on Ferguson, and won the Sigma Delta Chi award for best editorials of the year, given by the Society of Professional Journalists. Messenger lives in Wildwood, MO with his wife and two children. He has four grown children and eight grandchildren. Profit and Punishment is his first book.