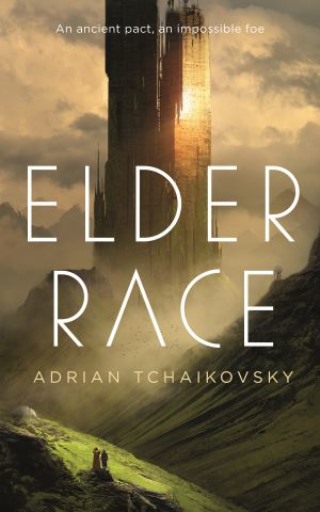 
In Adrian Tchaikovsky's Elder Race, a junior anthropologist on a distant planet must help the locals he has sworn to study to save a planet from an unbeatable foe.

Lynesse is the lowly Fourth Daughter of the queen, and always getting in the way.

But a demon is terrorizing the land, and now she’s an adult (albeit barely) with responsibilities (she tells herself). Although she still gets in the way, she understands that the only way to save her people is to invoke the pact between her family and the Elder sorcerer who has inhabited the local tower for as long as her people have lived here (though none in living memory has approached it).

But Elder Nyr isn’t a sorcerer, and he is forbidden to help, and his knowledge of science tells him the threat cannot possibly be a demon…

Adrian Tchaikovsky: Adrian Tchaikovsky is the author of the acclaimed Shadows of the Apt fantasy series and the epic science fiction blockbuster Children of Time. He has won the Arthur C. Clarke Award, a British Fantasy Society Award, and been nominated for the David Gemmell Legend Award. In civilian life he is a lawyer, gamer and amateur entomologist.