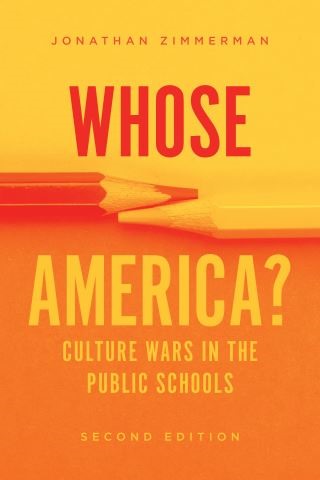 Culture Wars in the Public Schools

In this expanded edition of his 2002 book, Zimmerman surveys how battles over public education have become conflicts at the heart of American national identity.

Critical Race Theory. The 1619 Project. Mask mandates. As the headlines remind us, American public education is still wracked by culture wars. But these conflicts have shifted sharply over the past two decades, marking larger changes in the ways that Americans imagine themselves. In his 2002 book, Whose America?, Zimmerman predicted that religious differences would continue to dominate the culture wars. Twenty years after that seminal work, Zimmerman has reconsidered: arguments over what American history is, what it means, and how it is taught have exploded with special force in recent years. In this substantially expanded new edition, Zimmerman meditates on the history of the culture wars in the classroom—and on what our inability to find common ground might mean for our future.

Jonathan Zimmerman: Jonathan Zimmerman is professor of history of education and the Judy and Howard Berkowitz Professor in Education at the University of Pennsylvania. He is the author or coauthor of numerous books, including The Case for Contention: Teaching Controversial Issues in American Schools, also published by the University of Chicago Press.