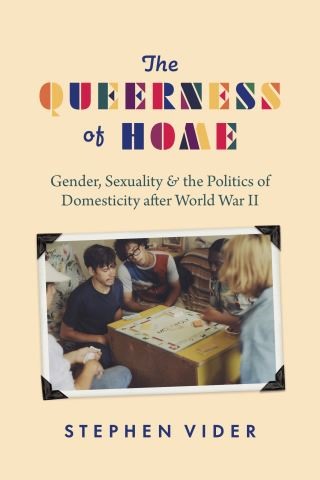 The Queerness of Home

Gender, Sexuality, and the Politics of Domesticity after World War II

From the Stonewall riots to the protests of ACT UP, histories of queer and trans politics have almost exclusively centered on public activism. In The Queerness of Home, Stephen Vider turns the focus inward, showing that the intimacy of domestic space has been equally crucial to the history of postwar LGBTQ life.

Beginning in the 1940s, LGBTQ activists looked increasingly to the home as a site of connection, care, and cultural inclusion. They struggled against the conventions of marriage, challenged the gendered codes of everyday labor, reimagined domestic architecture, and contested the racial and class boundaries of kinship and belonging. Retelling LGBTQ history from the inside out, Vider reveals the surprising ways that the home became, and remains, a charged space in battles for social and economic justice, making it clear that LGBTQ people not only realized new forms of community and culture for themselves—they remade the possibilities of home life for everyone.

Stephen Vider: Stephen Vider is assistant professor of history and director of the Public History Initiative at Cornell University.