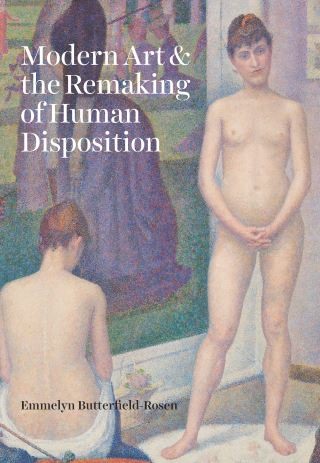 Modern Art and the Remaking of Human Disposition

How artists at the turn of the twentieth century broke with traditional ways of posing the bodies of human figures to reflect modern understandings of human consciousness.

With this book, Emmelyn Butterfield-Rosen brings a new formal and conceptual rubric to the study of turn-of-the-century modernism, transforming our understanding of the era’s canonical works. Butterfield-Rosen analyzes a hitherto unexamined formal phenomenon in European art: how artists departed from conventions for posing the human figure that had long been standard. In the decades around 1900, artists working in different countries and across different media began to present human figures in strictly frontal, lateral, and dorsal postures. The effect, both archaic and modern, broke with the centuries-old tradition of rendering bodies in torsion, with poses designed to simulate the human being’s physical volume and capacity for autonomous thought and movement. This formal departure destabilized prevailing visual codes for signifying the existence of the inner life of the human subject.

Exploring major works by Georges Seurat, Gustav Klimt, and the dancer and choreographer Vaslav Nijinsky— replete with new archival discoveries—Modern Art and the Remaking of Human Disposition combines intensive formal analysis with inquiries into the history of psychology and evolutionary biology. In doing so, it shows how modern understandings of human consciousness and the relation of mind to body were materialized in art through a new vocabulary of postures and poses.