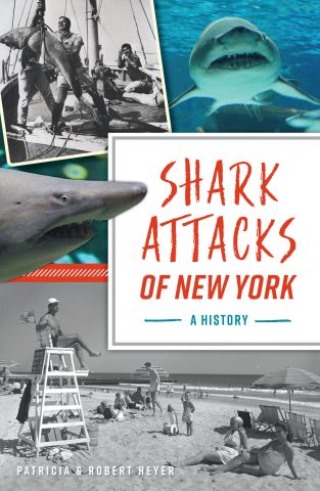 New York's crowded beaches can come to halt with the shout of a single word: shark! The shores of Long Island and Staten Island and the waters surrounding Manhattan have had more than thirty shark attacks recorded since the days of New Amsterdam. Legend has it that Antony Van Corlear, Peter Stuyvesant's trusted deputy, was killed by a shark crossing Spuyten Duyvil Creek while blowing his famed trumpet. In the summer of 1916, after a series of bloody encounters along the Jersey Shore, sharks terrorized beachgoers of Sheepshead Bay, frightening the entire region. Two incidents on Fire Island in 2018 within mere hours and miles of each other involved a twelve-year-old and a thirteen-year-old, striking fear in the hearts of parents. Authors Patricia and Robert Heyer chart the history of New York's shark attacks.

Patricia Heyer: Patricia and Robert Heyer have combined his background in biology and research with her love of history and skills as a writer to create Shark Attacks of New York. They continue to spend their spare time exploring local "winter" beaches while remaining ardent supporters of shark conservation.|||