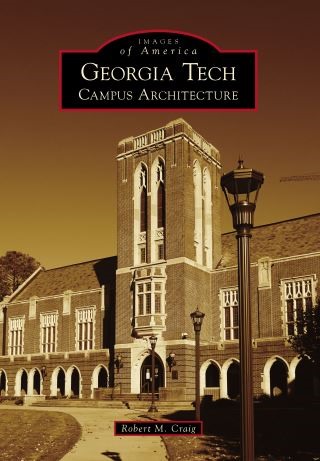 The architectural development of Georgia Tech began as a core of Victorian-era buildings sited around a campus green and Tech Tower. During the subsequent Beaux-Arts era, designers (who were also members of the architecture faculty) added traditionally styled buildings, with many of them in a pseudo-Jacobean collegiate redbrick style. Early Modernist Paul Heffernan led an architectural revolution in his academic village of functionalist buildings on campus--an aesthetic that inspired additional International Style campus buildings. Formalist, Brutalist, and Post-Modern architecture followed, and when Georgia Tech was selected as the Olympic Village for the 1996 Summer Olympics, new residence halls were added to the campus. Between 1994 and 2008, Georgia Tech president G. Wayne Clough stewarded over $1 billion in capital improvements at the school, notably engaging midtown Atlanta with the development of Technology Square. The landscape design by recent campus planners is especially noteworthy, featuring a purposeful designation of open spaces, accommodations for pedestrian perambulations, and public art. What might have developed into a prosaic assemblage of academic and research buildings has instead evolved into a remarkably competent assemblage of aesthetically pleasing architecture.