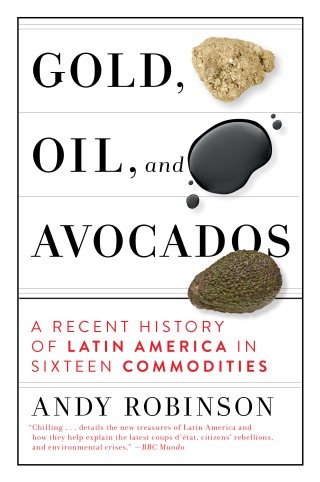 A Recent History of Latin America in Sixteen Commodities

The past decade has seen major political upheaval in Latin America--from Brazil to Chile to Venezuela to Bolivia--but to understand what happened, ask first where your quinoa and lithium batteries came from...

The 21st century began optimistically in Latin America. Left-leaning leaders armed with programs to reduce poverty and reclaim national wealth were seeing results—but as the aughts gave way to the teens, they began to fall like dominos. Where did the dreams of this "pink tide" go? Look no further than the original culprits of Latin American disenfranchisement: resource-rich land and unscrupulous extraction.

Recounting the story commodity by commodity, Andy Robinson reveals what oxen have to do with the rise of Jair Bolsonaro, how quinoa explains the mob that descended on Evo Morales, and why oil is the culprit behind the protracted coup in Venezuela. In addition to the usual suspects like gold and bananas which underscored the original plunder of the Americas, Robinson also shows how a new generation of valuable resources—like coltan for smartphones, lithium for electric cars, and niobium for SpaceX rockets—have become important players in the fate of Latin America. And as the energy transition sets mineral prices soaring, Latin America remains at the mercy of the rollercoaster of commodity prices.

In Gold, Oil, and Avocados, Robinson takes readers from the salt plains of Chile to the depths of the Amazonian jungle to stitch together the story of Latin America's last decade, showing how the imperial plunder of the past carries on today under a new name.

Andy Robinson: ANDY ROBINSON is a roving reporter for the Barcelona daily, La Vanguardia. A graduate of the London School of Economics, he moved to Spain in the eighties where he wrote for The Guardian, The New Statesman, City Limits, Ajoblanco, El Mon, and others. He is a regular contributor to The Nation and has published two previous Spanish-language books, Un reportero en la montaña mágica (Ariel, 2013) and Off the road, miedo, asco y esperanza en América (Ariel, 2016).