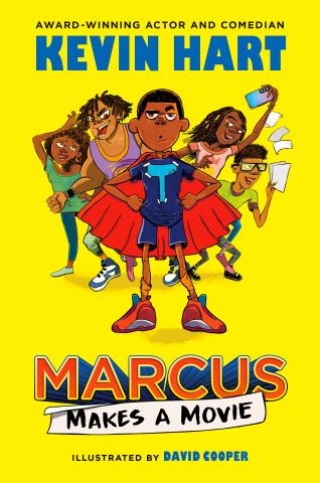 Marcus is NOT happy to be stuck in after-school film class . . . until he realizes he can turn the story of the cartoon superhero he’s been drawing for years into an actual MOVIE! There’s just one problem: he has no idea what he’s doing. So he’ll need help, from his friends, his teachers, Sierra, the strong-willed classmate with creative dreams of her own, even Tyrell, the local bully who’d be a perfect movie villain if he weren’t too terrifying to talk to.

Making this movie won’t be easy. But as Marcus discovers, nothing great ever is—and if you want your dream to come true, you’ve got to put in the hustle to make it happen.

Comedy superstar Kevin Hart teams up with award-winning author Geoff Rodkey and lauded illustrator David Cooper for a hilarious, illustrated, and inspiring story about bringing your creative goals to life and never giving up, even when nothing’s going your way.

Kevin Hart: Emmy nominated producer Kevin Hart was born and raised in Philadelphia, PA, where he launched his career as a comedian during an amateur night at a local comedy club. Over the years Hart has become a Hollywood powerhouse, opening ten films at number one at the box office. Hart has popularized characters in the beloved Jumanji franchise and The Secret Life of Pets 2, his newest stand-up special became Netflix's biggest stand-up special of 2020, and his memoir, I Can’t Make This Up, debuted at number one on the New York Times bestsellers list, remaining on the Top 10 Print Hardcover Bestsellers List for ten weeks straight. In addition to selling out theaters and arenas for his comedy tours, Hart is the founder of the Laugh Out Loud Network, which serves as a platform for emerging comedians and is home to two premium series which both feature Hart. Hart also launched Laugh Out Loud Radio channel 96 on SiriusXM, with Hart hosting alongside longtime friends and fellow comedians, The Plastic Cup Boyz. In April 2019, their featured talk show “Straight From The Hart” became available on Pandora and now ranks as the #1 podcast across all genres.

Geoff Rodkey is the author of the bestselling Tapper Twins comedy series; the Chronicles of Egg adventure trilogy; We're Not From Here, an NPR and Kirkus Best Book of the Year; and The Story Pirates Present: Stuck in the Stone Age, a comic novel bundled with a how-to guide for kids who want to create stories of their own. His first novel for adults, Lights Out in Lincolnwood, publishes in July. He's also the Emmy-nominated screenwriter of such films as Daddy Day Care and RV. Learn more at geoffrodkey.com, and follow Geoff on Twitter at @GeoffRodkey.

David Cooper is a multi-media artist and muralist, born and raised in Brooklyn, New York. His work has appeared on book covers, ad campaigns, and editorial publications, such as The New York Times, Print Magazine, and POZ Magazine. He has painted large-scale murals at Miami Art Basel, Brooklyn, and has been exhibited at The New York Society of Illustrators. Learn more about David's work online at davidcooperart.com.