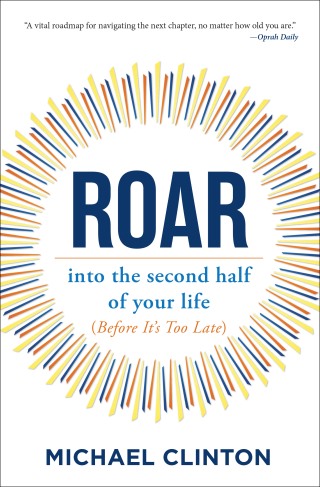 into the second half of your life (before it's too late)

This “inspiring reminder that it is never too late to reinvent yourself” (Nina García, editor-in-chief, Elle) shows you how to make second half of your life happy and productive—whether or not retirement is in your future plans.

We are living in a time when everyone is constantly reassessing what is next for them. In the mid-career group, people who have spent years working are now seeing their industry dramatically evolve and are facing the question: “What does that mean for me in the next twenty years?” At the same time, the post-career population is also going through massive change and dealing with the fact that many of them are not prepared financially, logistically, or emotionally for the next phase of their lives. And while we may want to retire, most of us don’t want to do nothing.

With expert insight and approachable techniques, Roar helps you identify fresh goals and take meaningful action to achieve a purposeful life. Featuring a unique and dynamic 4-part process, Roar shows you how to:

Transformative and invigorating, “you couldn’t pick a better roadmap for your next chapter than Roar. It teach[es] you how to approach the future not with fear or worry, but with passion and purpose” (Michael Sebastian, editor-in-chief, Esquire).

Michael Clinton: Michael Clinton is the former president and publishing director of Hearst Magazines and is currently special media advisor to the Hearst Corporation’s CEO. He is also an author and photographer who believes that everyone should strive to live their fullest life possible—especially in the second half of life. A regular columnist for Men’s Health, his work has also been featured in Forbes, Oprah Daily, Esquire, ELLE, and on CBS Mornings among others. Michael has traveled through 124 countries, has run marathons on seven continents, is a private pilot, is a part owner of a vineyard in Argentina, has started a nonprofit foundation, holds two master’s degrees, and still has a long list of life experiences that he plans to tackle. He resides in New York and Santa Fe, New Mexico.