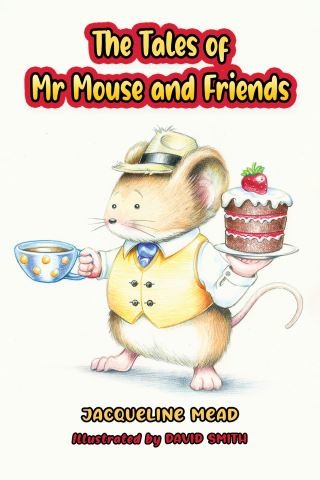 The Tales of Mr Mouse and Friends

Join Mr. Mouse as he tends to his award-winning garden, makes friendships, meets Hilda his future wife, all the while drinking lots of tea and eating lots of cake. Mr. Mouse is a popular character whose door is always open, who is on hand to help anyone who needs assistance, who will rally around a worthwhile cause and who is highly thought of throughout the woodland community. Each chapter is a short story of its own and set in a season, there are twelve chapters following Mr. Mouse over three years. Read about the woodlands during a harsh winter when the woodlands are covered in six-foot snow drifts, during spring when the season is changing from winter, summer when Mr. Mouse’s award-winning gardens are at their best and autumn when the trees and plants are losing their leaves.
Mr. Mouse with a house on the River Louse will become a favourite bedtime story for your children.

Jacqueline Mead: Jacqueline Mead is a children’s author from Devon, England. Born in Plymouth, for the last twenty years she has been living with her family in Exeter, Devon. She wrote her first children’s book at the age of 56. It was based on a story that she made up for her own children at bedtime. She has been married for 39 years and has three children and five grandchildren. She continues to share her love of books and stories with her grandchildren, aged between one and fifteen years old. She tries out her new manuscripts on her children and older grandchildren.